If the batting effort from the Chennai Super Kings (CSK) was bad in the game against Rajasthan Royals (RR), it turned worse in a crucial game against Mumbai Indians (MI) in Sharjah. The four-time champions were all over their favourite opposition with the new ball after their skipper Kieron Pollard won the toss and opted to field first.

Trent Boult and Jasprit Bumrah made the new ball talk to leave CSK four wickets with just three runs on the board in the second over itself. While Ruturaj Gaikwad and N Jagadeesan bagged ducks, Faf du Plessis and Ambati Rayudu scored 1 and 2 runs respectively. The top four could only aggregate 3 runs overall which is the lowest in the history of the Indian Premier League (IPL).

They bagged the embarrassing record going past the now-defunct franchise of Kochi Tuskers Kerala (KTK) whose top four batsmen had mustered only 4 runs against the Deccan Chargers back in 2011. CSK batsmen never looked like scoring a run on the day and have ended up breaking a nine-year-old unwanted record.

Interestingly, the team which inflicted this record on CSK, MI is also in this list at the fourth position. Their top four had managed to score only five runs against Royal Challengers Bangalore (RCB) at the Chinnaswamy Stadium only three years ago in the 2017 IPL season.

Mumbai Indians’ bowlers, however, had enjoyed this success back in 2011 as well when they ripped apart the Delhi Daredevils’ (now Capitals) top four for just five runs. Kings XI Punjab (KXIP) also experienced such a collapse in the same season at the DY Patil Stadium in Mumbai against Pune Warriors India (PWI). They had lost their top four batsmen for just 8 runs.

However, it was shocking to see CSK collapse in such a way and that too in a do or die game to stay in the hunt for the playoffs. To make it even worse not even MS Dhoni could stick around and Sam Curran saved the day for them scoring some vital runs batting at number seven.

Lowest aggregate by a team’s top four in an IPL match: 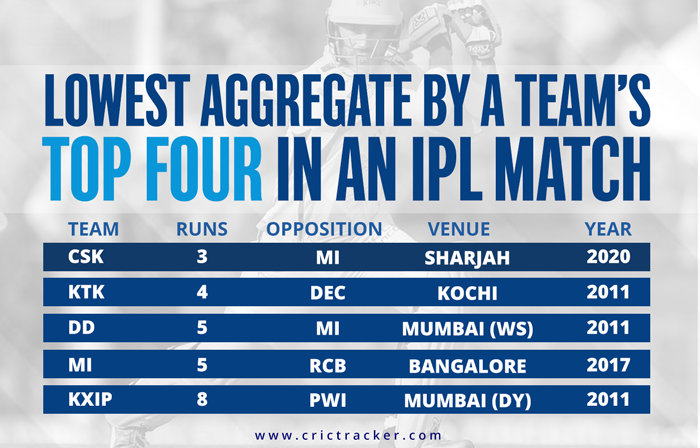