Warner and Bairstow shared a 185-run partnership for the first wicket.

The IPL has gotten off with a bang, and within a week of its commencement, multiple masterful batting displays have been on the show. Be it Sanju Samson’s masterful century or Prithvi Shaw’s classy 99, or the powerhouse hitting by the likes of Andre Russell and Chris Gayle, the crowd has not been denied entertainment in terms of the big shots. Sunday’s match between the Sunrisers Hyderabad and the Royal Challengers Bangalore proved no exception, with David Warner and Jonny Bairstow lighting up the stage.

The eleventh match between the Sunrisers and the Royal Challengers from the Rajiv Gandhi International Stadium in Hyderabad witnessed some masterful batting by the SRH openers. At the toss, Bhuvneshwar Kumar appeared as the stand-in captain for Hyderabad with Kane Williamson out injured and was sent in to bat by counterpart Virat Kohli. However, Kohli would never have imagined how that decision would impact the game.

Warner and Bairstow opened the innings as usual for the Sunrisers and tore into the RCB bowling right from the get-go. They smacked boundaries with ease all over the park, reaching their 3rd century partnership in three games within 9.4 overs. Though the start was really good, what followed was extraordinary. Both batsmen brought up centuries in their innings, with Bairstow scoring 114 off 56 balls and Warner an unbeaten 55-ball-100, to take the Sunrisers to a mammoth 231/2 in their 20 overs.

Bairstow brought up his century in the 15th over before finally perishing in the 17th, falling to Chahal with Warner on 70 and the score on 185. En route, he smashed 12 boundaries and 7 sixes. Warner then took on the role of the aggressor and brought up his hundred in the final over, hitting 5 fours and 5 maximums en route. The RCB bowling stats were evidently extremely shabby, with debutant Prayas Ray Barman was hit for a dismal 56 in his four overs.

Warner has now scored 254 in 3 innings and sits pretty on the Orange Cap records with an astonishing average of 127. His 185-run opening stand with Bairstow today was the highest-ever opening partnership in the IPL. But that was not the only record the duo managed. This is only the fourth time in T20 cricket that two players have scored centuries in the same innings. It is the second time in the IPL, with the first being twin centuries from Kohli and AB de Villiers against Gujarat Lions in 2016. This time, though, RCB were at the receiving end.

Here are the occasions when two centuries were scored in the same innings: 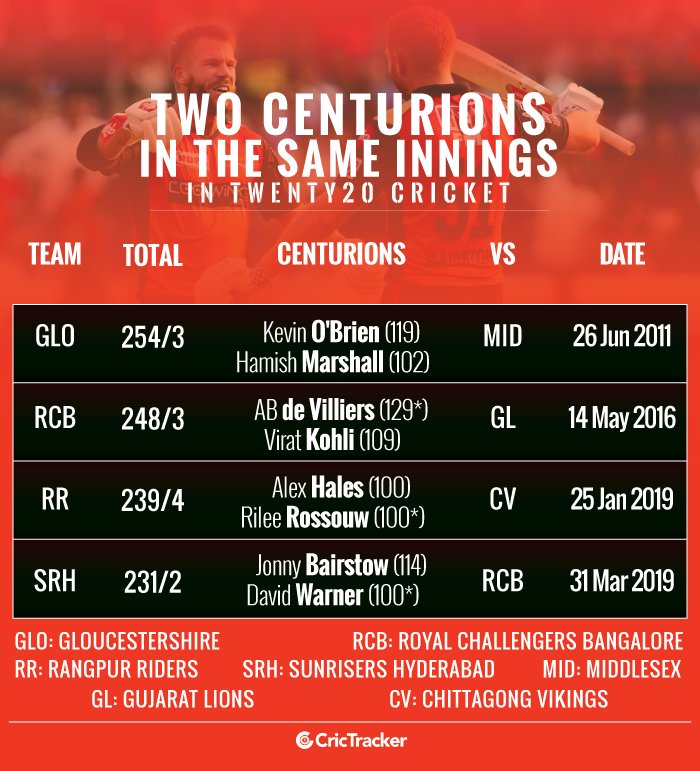