Deepak Chahar remained unbeaten on 55 off 42 balls with the help of seven sixes.

Deepak Chahar is having a remarkable month as he started November with a player of the series performance against Bangladesh in the 3-match T20I series. He concluded the series by recording the best bowling figures in Men’s T20I cricket. Chahar’s effort included a hat-trick, the first by an Indian in Men’s T20Is. Deepak nearly followed it with yet another hat-trick as he took wickets off three consecutive legitimate deliveries against Vidarbha in the Syed Mushtaq Ali Trophy.

Leading the Rajasthan team, the pacer also took three wickets in his last over against Uttar Pradesh. On Wednesday, Deepak Chahar showed his skills with the bat in a must-win match. Rajasthan needed to beat Delhi team in the last match of the Super League phase for qualifying for the semi-final. Skipper Chahar walked to bat after Rajasthan were reduced to 50/5 in the 10th over.

Deepak Chahar couldn’t get going straight away as he was batting on 7 off 25 balls at the end of 16th over. The 27-year-old unleashed the batsman in him with three sixes in the 17th over which was bowled by Lalit Yadav. Chahar smashed a couple of maximums in the 19th over and raised his maiden fifty with two more sixes in the final over of the innings. Deepak finished with an unbeaten 55 off 42 balls with seven maximums.

Rajasthan finished with 133/7 in their 20 overs and later won the game by two runs as they restricted Delhi to 131/9. This victory helped Rajasthan to qualify for the semi-finals. Deepak Chahar’s innings included seven sixes but no fours which made him only the 3rd Indian to smack seven maximums in a Twenty20 innings without a four. Nitish Rana against Kings XI Punjab and Sanju Samson against Gujarat Lions hit seven maximums in an innings without a boundary four during IPL 2017.

The previous most sixes in a Syed Mushtaq Ali Trophy match without hitting a four was 6 sixes by Manender Singh. He recorded this while playing for Rajasthan in this season only. In the Twenty20 format, only two players hit more maximums in an innings without a four. Riki Wessels hit nine against Worcestershire while Will Jacks struck eight against Kent during 2018 T20 Blast and 2019 T20 Blast matches respectively. Chahar also became the first player to hit as many as seven maximums in a T20 innings for Rajasthan.

Most sixes without hitting a four in an innings in Twenty20 cricket: 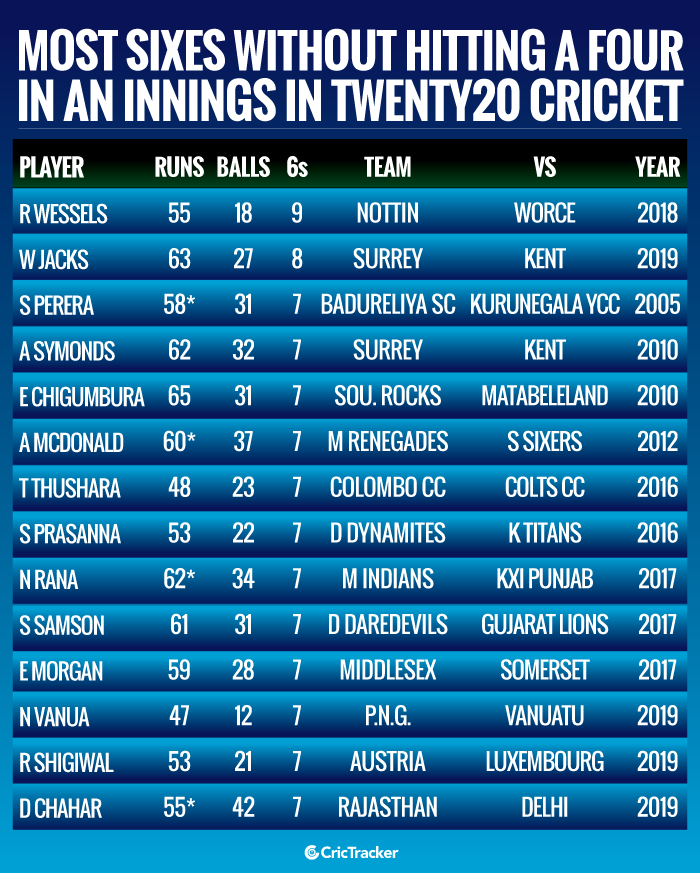