Sanju Samson is the latest entrant in this elite list

Sanju Samson entered the elite list of Indian batsmen on Sunday after scoring a sensational double hundred in the Vijay Hazare tie against Goa. He scored an unbeaten 212 as Kerala posted a mammoth total on the board. The first batsman to achieve this feat was South African legend Graeme Pollock, who made 222* for Eastern Province against Border in October 1974.

Since then there have been 30 scores of 200 or more being hit in the domestic 50-over format. But for Indian fans, they had to wait until 2010 for a batsman from their country to achieve the special feat. Sachin Tendulkar reached the magic number against South Africa in Gwalior and in the process became the first male batsman to score a double century in ODI cricket, beating the former highest score of 194* by Saeed Anwar.

Since then, six Indian batsmen have scored a double ton in List-A cricket and Rohit Sharma is the only one to achieve the feat multiple times, thanks to his three scores of over 200 in ODI cricket. Meanwhile, after Tendulkar, the second Indian to score a double ton was Virender Sehwag, who became the first captain to do so in ODIs.

He slammed 219 against West Indies in 2011 in Indore. 2013 witnessed two batsmen making double tons with Rohit Sharma scoring 209 against Australia, with a record 16 sixes. And Shikhar Dhawan joined him scoring 248 for India A against South Africa A in Pretoria.

Sharma is the only batsman to score three double tons in List-A and ODI cricket. A rather unknown name in the list is of Karn Veer Kaushal. He hogged the limelight after scoring  202 for Uttarakhand against Sikkim last year. This was the first double century in the history of the Vijay Hazare Trophy.

However, Sanju Samson, on October 12, went past Kaushal’s record and scored 212* against Goa in 2019-20 Vijay Hazare Trophy match in Alur. He scored his hundred in just 66 balls and reached his 200 in 125 deliveries. His record-breaking innings was laced with 21 fours and 10 sixes. Incidentally, this was Samson’s maiden List-A century as well.

Here is the list of double centuries by Indian batsmen in List-A cricket: 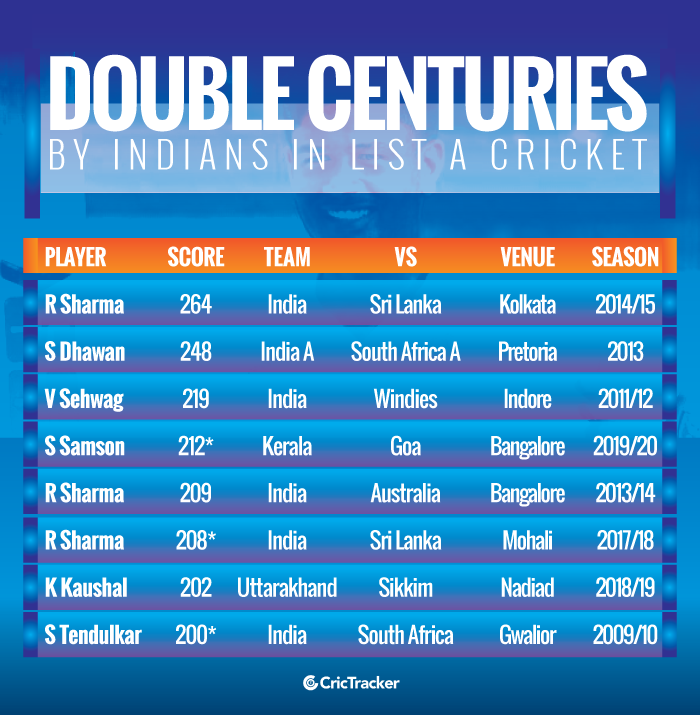