Stats: Fastest batsmen to complete 1000 runs in the ODI cricket

Stats: Fastest batsmen to complete 1000 runs in the ODI cricket

Fakhar Zaman hit a boundary when he was on 17 to complete 1000 runs in ODI cricket.

Fakhar Zaman has made a brilliant start to his ODI career after making his debut in this format during the ICC Champions Trophy hosted by England in 2017. He waited to make his debut at the age of 27 but did show the World what he is capable of with the fifties in consecutive must-win matches against Sri Lanka and England during the ICC event. He produced what could be his career’s biggest moment for a while in the Final against India where he scored 114 to help his team clinch the title.

After a lean patch in the bilateral series against Sri Lanka and New Zealand, Fakhar returned to form of life with the record-breaking spree in the ODI series against Zimbabwe. He began the series with a 60 before scoring 117* and 43* in next two matches during short chases. The left-hander made sure he made most out of the chance to bat first in the 4th ODI scoring an unbeaten 210 to become the first Pakistan player with an ODI double ton.

Fakhar Zaman became the least experienced to break the 200-run barrier as he scored in his 17th ODI only. The opener reached 980 career runs in the ODI format by end of the innings. Fakhar hit a boundary when he was on 17 off 26 balls in the final ODI when he needed 20 more runs to complete 1000 ODI runs. Thus, he became the fastest to reach the milestone taking only 18 innings. He bettered the record for quickest to 1000 ODI runs held by five different players in 21 innings. 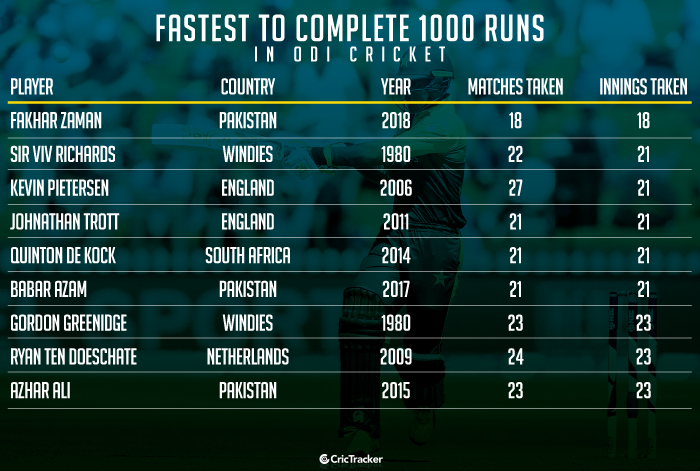