Stats: Fastest centuries in the history of Youth Test cricket

Stats: Fastest centuries in the history of Youth Test cricket

Atharwa Taide scored 177 in only 172 balls in the 2nd Youth Test match against Sri Lanka.

After an innings win in the first of the 2-match Youth Test series, India Under-19s made a great start in the 2nd game as Atharwa Taide and Pawan Shah scored 177 runs each. Opener Atharwa scored his runs at a quick pace against Sri Lanka as he made a 172-ball 177 with 20 fours and three sixes. He brought up his century in only 89 deliveries and was well set towards a big double ton by end of the day. However, he got out just before Tea interval bringing an end to his 263-run 2nd wicket stand with Pawan.

During the first Test at the NCC Ground in Colombo, Taide scored 113 off 160 balls with 13 fours. Thus, he became only the 5th Indian player to score centuries in consecutive Youth Test innings. The list includes Vinayak Mane against England in 2001, Piyush Chawla in 2006/07, Abhinav Mukund against Sri Lanka in 2008 and Vijay Zol also against Sri Lanka in 2013. Mukund scored 208 and 103 in the same Test match played at Kandy making him the only Indian to score twin tons in a Youth Test match.

The 89-ball century from Atharwa Taide is now 2nd fastest among the list of known hundreds in Youth Test cricket. Moeen Ali holds the record for the fastest century in Youth Test cricket as he struck a 56-ball ton in the 2005 Leeds Test against Sri Lanka. Moeen scored an unbeaten 100 off 56 balls with ten fours and five sixes. Moeen ton is also the only Youth Test ton that was recorded in less than 100 balls. The left-handed batsman completed his century in only 69 minutes.

England’s Liam Dawson scored a 93-ball hundred against the Kiwis in the 2008 Taunton Test. Brendon McCullum had fun against South Africa during the 2001 Youth Test series scoring centuries in 96 and 97 balls respectively. Pakistan Hasan Raza once scored an unbeaten 103 off 97 balls but the exact details of the game are not found. Back in 1993, Stephen Fleming scored 120 off 113 balls against Australia but his century details weren’t recorded. The New Zealand batsman reportedly took at least 91 balls (91-103) for his ton. 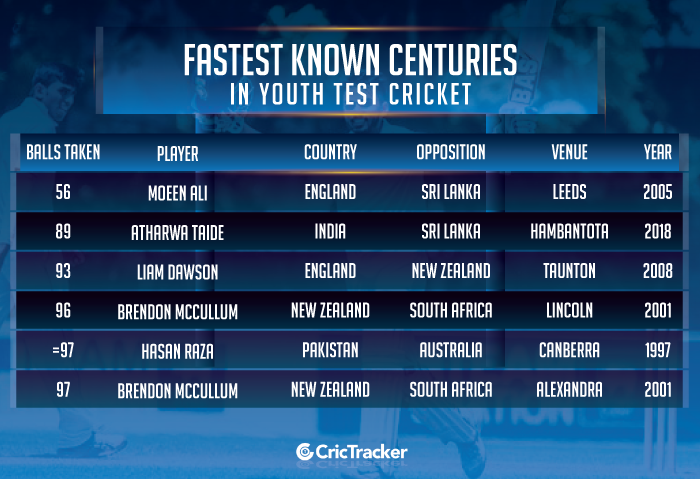