Rohit was 46 runs away from the milestone before the fifth ODI against Australia.

India are currently playing the fifth and final ODI against Australia and have found themselves in trouble chasing 273 runs in the decider. The visitors’ spinners have strangled them amazingly and Rohit Sharma’s wicket has more or less sealed the fate of the game unless Kedar Jadhav produces a brilliant innings. Meanwhile, Rohit, during his 56-run knock, crossed the 8000-run mark in his ODI career.

He was 46 runs away coming into this game and now has become the third fastest to the milestone. Rohit Sharma took exactly 200 innings (206 matches) to reach the landmark and has gone past the likes of Sachin Tendulkar and Sourav Ganguly among the other greats of the game. He currently has 8010 runs to his name in the 50-over format at an impeccable average of 47.41 and looks set to enter the 10,000-run club in the next few years as well.

Virat Kohli hands down tops the charts in this case as well having reached the mark only in 183 matches and 175 innings. He has already crossed the five-figure mark and is destined to go past Tendulkar it seems. AB de Villiers is the next in the list and he got to the milestone seven innings late compared to the Indian captain.

Rohit Sharma completed 8000 runs levelling Sourav Ganguly in terms of innings taken but the latter had played two matches more. Sachin is the sixth in the charts and in the middle of his illustrious career, he took 210 outings to reach the milestone. He is behind Ross Taylor though who has captured the fifth place in this list.

Windies legend Brian Lara, who ended with 10405 runs in his ODI career, just took one innings more than Tendulkar to complete 8000 runs during his playing times. Rohit is the new entrant in this special club and he has gone past some of the greats definitely and looks the favourite to score even more runs. 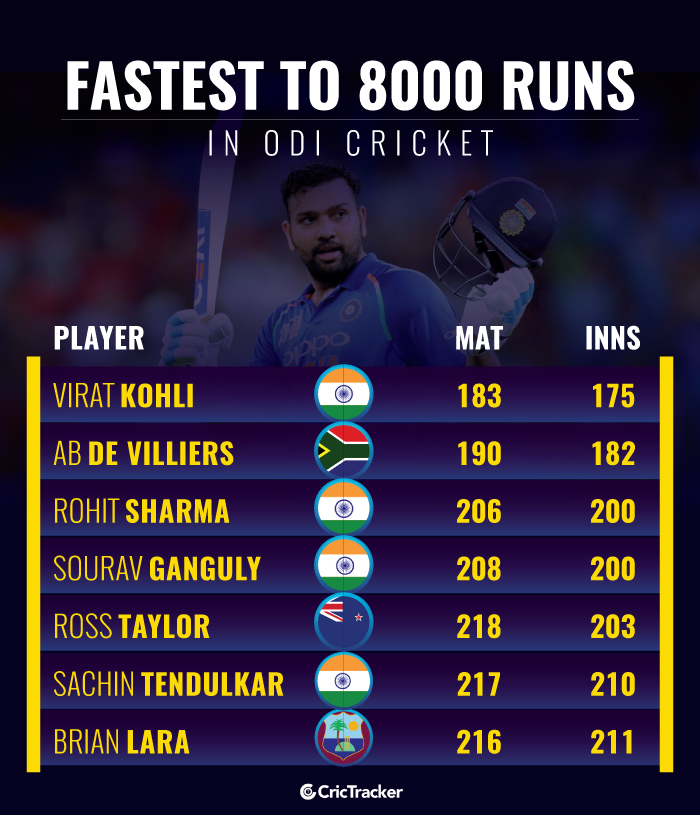