Stats: Hardik Pandya's rise as a death overs beast in the IPL

Stats: Hardik Pandya’s rise as a death overs beast in the IPL

Hardik Pandya has scored 200 runs in IPL 2019 during the last five overs from only 85 deliveries.

Hardik Pandya has taken his exploits with the bat to the next level in the ongoing 12th edition of the IPL as the all-rounder’s big hitting skills achieved consistency. The 26-year-old has been key for the Mumbai Indians’ success this season as he already won two player of the match awards out of his team’s six victories thus far. The all-rounder from Baroda has scored 241 runs in ten matches though he hasn’t scored more than 37 in any innings.

His strike-rate of 189.76 says the amount of damage he has inflicted in the opposition camp. This season has been a benchmark with the bat for Hardik as 20 more runs in this season will make 2019 his best IPL with the bat. With four matches in the league stage and a couple more possibly in the playoffs, Hardik is all set to finish with 350-400 runs. The most impressive thing in his success this year is his clean hitting against some of the best pacers around.

Last season was a forgettable one of the Hardik as he averaged only 16.9 at the death against the pacers. His strike-rate of 155.17 against them between 16-20 overs was also not convincing. He turned things upside down in 2019 by scoring 173 runs against the pacers in this period at a strike-rate of 227.83 and has been dismissed only three times. His recent success could come in handy at the World Cup to be played in England this year.

Overall, he is striking at a rate of 235.09 in the death overs this year; his best IPL season during this phase. In his debut season in 2015, Pandya impressed one and all with his late hitting. He scored his runs at a strike-rate of 220.93 and at 214.29 against the pacers back then. However, in the previous three seasons, the rate went below 200. 2016 was probably his worst when he failed to get going at No.3 in the first half of the tournament and didn’t do any better in the second half batting down the order.

While the focus is usually on the strike-rates of the batsmen in the last five overs, Pandya is improving his average as well. He is averaging 50 in the last five overs in the ongoing season and it raises up to 57.67 while facing the fast bowlers. All Pandya has to do here on is to improve his hitting against the bowlers like Jofra Archer and Kagiso Rabada.

So far, only Archer and Andrew Tye have dismissed Pandya more than once in the IPL at the death. Against the South African pacer Rabada, Hardik has a S/R of only 121 during the death overs. He has shown little improvement against Dwayne Bravo this season against whom he didn’t hit a boundary in 20 balls previously. During the game at the Wankhede this year, Pandya finished off the innings with 6, 4 and 6 against the leading wicket-taker of the T20 format. 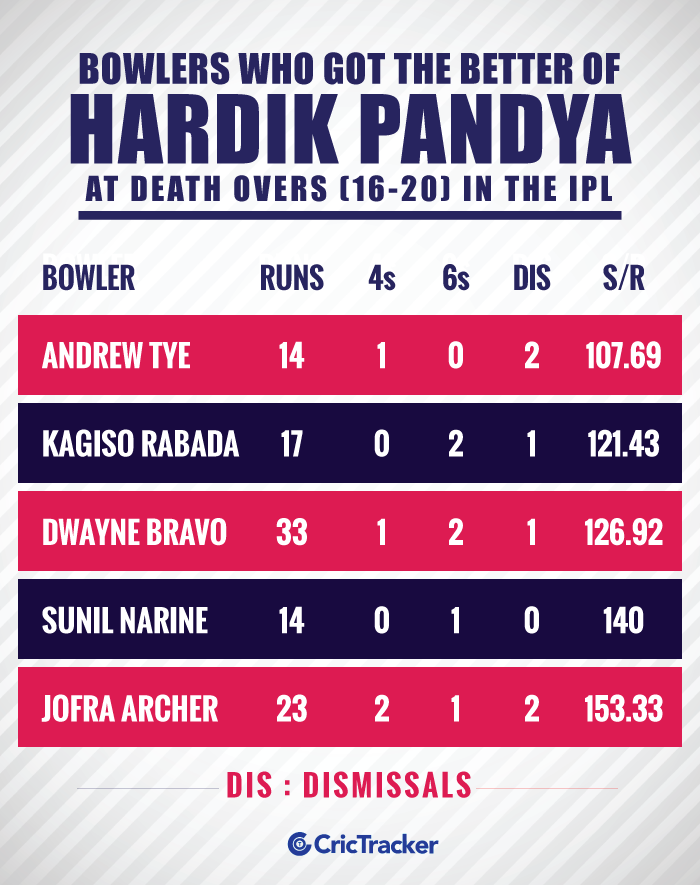