With the six sixes, Harmanpreet became only the 2nd player in the history of Kia Super League (6) to hit as many as six sixes.

Harmanpreet Kaur put up a display of her big-hitting skills in the Kia Super League game on Tuesday when she turned up for her team Lancashire Thunder. In the home game against Yorkshire Diamonds, Harmanpreet scored 74 in just 44 balls that included four fours and six maximums. Her knock helped the Lancashire side to finish on 154/9 in the game played at Stanley Park in Blackpool. Kaur, who walked in at 43/2 in the 8th over, ensured her team made 58 runs in the last six overs.

The Indian Women’s T20I skipper began her KSL career with a wind whirl 21-ball 34 in a successful chase and hit four and six when her team needed eight runs from the last three balls. However, Harmanpreet aggregated only 12 runs in her next four innings that included two ducks. After a great debut, Kaur bagged a golden duck when she was run out. She followed it up with yet another duck; this time without facing a ball. Her next two innings yielded only eight and four runs respectively.

Lancashire kept losing wickets after a 53-run 3rd wicket stand between Harmanpreet and the opener Nicole Bolton (46). Harmanpreet cut loose at the end as she struck three sixes in the last seven balls of her innings. Her partners sacrificed their wickets to keep the Indian International on strike. Kaur’s innings finally came to end in the final over when she miscued a shot off Katharine Brunt.

With the six sixes, Harmanpreet became only the 2nd player in the history of Kia Super League (6) to hit as many as six sixes. South African keeper-batswoman Lizelle Lee also hit six sixes for her team Surrey Stars on two different occasions.

Most sixes by a player in a Kia Super League innings: 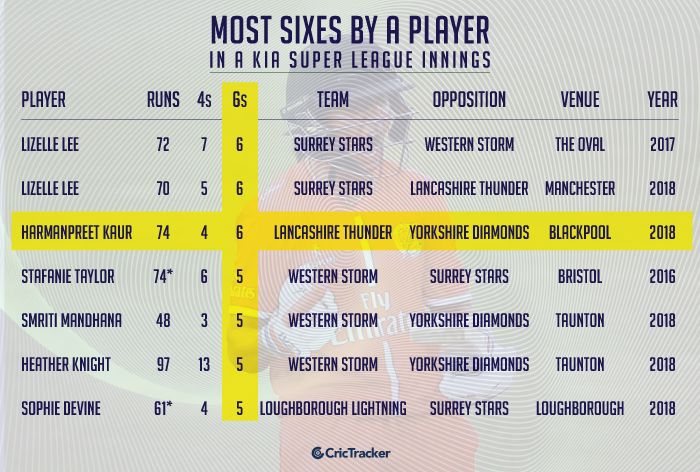