India Women thrashed New Zealand Women in the second ODI and won the series with one match to go on Tuesday. After bowling out the White Ferns for 161 runs, Smriti Mandhana and Mithali Raj stitched an unbeaten partnership of 151 runs to steer India home with eight wickets in hand. While Mandhana remained unbeaten on 90, Raj played a handy knock of 63 runs off 111 balls in the winning cause.

In the process, the Indian skipper went past MS Dhoni in the successful ODI run-chases in terms of average. Dhoni averages a massive 103.07 in 73 innings in such matches and has amassed 2783 runs and has remained not out 46 times. However, Raj has gone one step ahead of the former captain. She averages a mindboggling 111.29 now in successful run-chases after 48 innings. She has remained unbeaten 31 times scoring 1892 runs with a century and 15 scores over 50.

Amazingly, Virat Kohli is the third in the charts and ridiculuously averages 96.23. He has scored more runs (5004 runs) than anyone in this list and the only thing which has stopped him from topping is the fact that the Indian captain was in the middle only 28 times when India won the game. Kohli has smashed 21 centuries in successful centuries and 20 fifties in successful chases when the others haven’t even managed more than 10.

She has scored 1802 runs in 31 innings at an average of 78.34 in winning cause while gunning down the totals in the 50-over format. While Root averages 77.80, Hussey was one of the best finishers for the Men in Yellow in the ODIs and he remained not out on 17 occasions out of 27 innings. 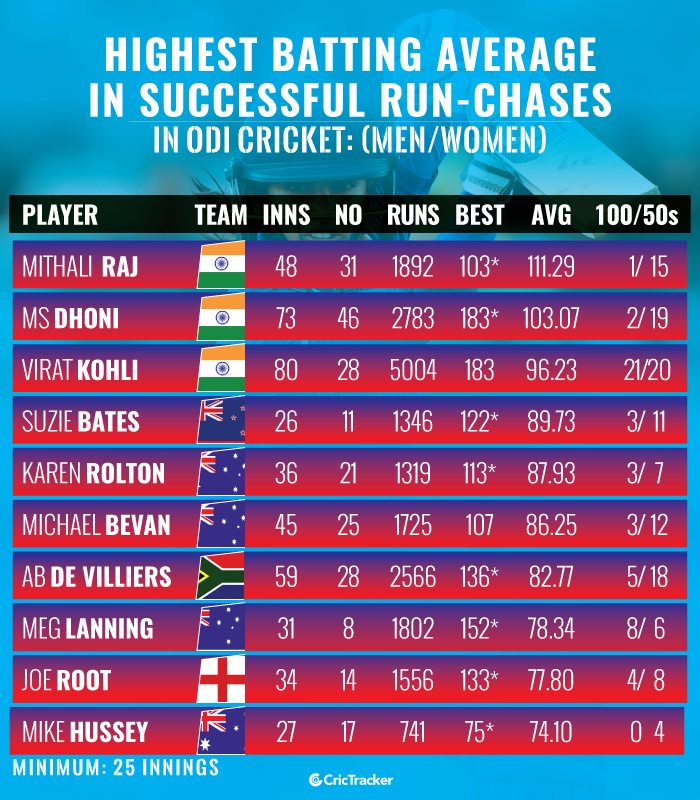