India posted a huge total of 613/8 in the 2nd Youth Test match against Sri Lanka.

India’s U19 boys batted long for the 2nd consecutive time in the Youth Test series against Sri Lanka as they made their record total of 613/8 in the first innings of the Hambantota Test. The total was well aided by opener Atharwa Taide’s 177 and Pawan Shah’s record 282-run knock. The No.3 batsman Pawan now the record for the highest individual score by an Indian in Youth Test cricket and fell 18 runs short of becoming only the 2nd player to score a triple ton in this format.

He shared 263-run 2nd wicket partnership with Taide that came in just 46.2 overs. The opening batsman raced to an 89-ball century which is the 2nd fastest known hundred in Youth Test cricket. Pawan Shah scored 282 in only 332 balls with 33 fours and a six. India declared their innings soon after Pawan got run out. The total of 613/8 they made is their highest Youth Test cricket total surpassing 611/9 they made in the 2006 Peshawar Test against Pakistan.

Pawan Shah surpassed the previous highest Youth Test score by an Indian by 62 runs. Tanmay Srivastava scored 220 against Pakistan in 2006 which stood as the highest individual Youth Test score by an Indian for the last 12 years. Pawan’s 282 is the 2nd highest individual score in this format behind Clinton Peake of Australia who scored an unbeaten 304 against India in the 1995 Melbourne Test.

There was a possible chance of Arjun Tendulkar being on non-strikers end when Pawan got to a triple ton like his father Sachin Tendulkar who was at the other end when Virender Sehwag got the first Test triple by an Indian. However, both Arjun and Pawan got runout in consecutive overs as the unique instance remained as a thought. 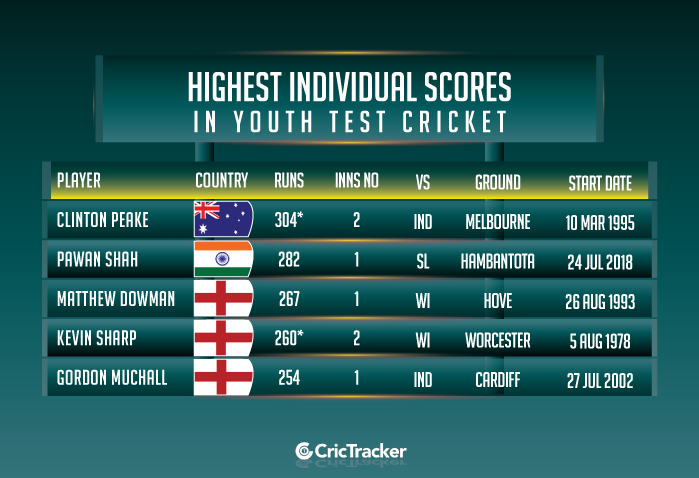