Stats: Jalaj Saxena achieves a unique feat with his effort in the Ranji Trophy game against Andhra

Stats: Jalaj Saxena achieves a unique feat with his effort in the Ranji Trophy game against Andhra

Kerala's Jalaj Saxena scored 133 with the bat and took 8/45 with the ball against Andhra.

Jalaj Saxena continued his exceptional performances in the Ranji Trophy to power his team Kerala to a comfortable win over Andhra. In the second round game played at the St Xavier’s College Ground in Thumba, Saxena scored a century to help his team gain first innings lead. In response to Andhra’s total of 254, Saxena’s 133-run knock placed Kerala at 241/1. His wicket triggered a collapse the home team was restricted to 328.

The Indore-born player struck gold with the ball as well to run through the visiting team’s batting. With a 74-run lead in hand, Kerala would look at this game as a 7-pointer. Saxena picked up seven of the eight wickets to fall on day three who as Andhra were reduced to 90/8. They were eventually bowled out for 115 on 4th morning as Saxena finished with figures of 8/45 in his 21.3 overs. Kerala had to settle with only six points as they lost the wicket of Arun Karthick in the 42-run chase.

A century and an 8-wicket haul in a first-class match by Indians: 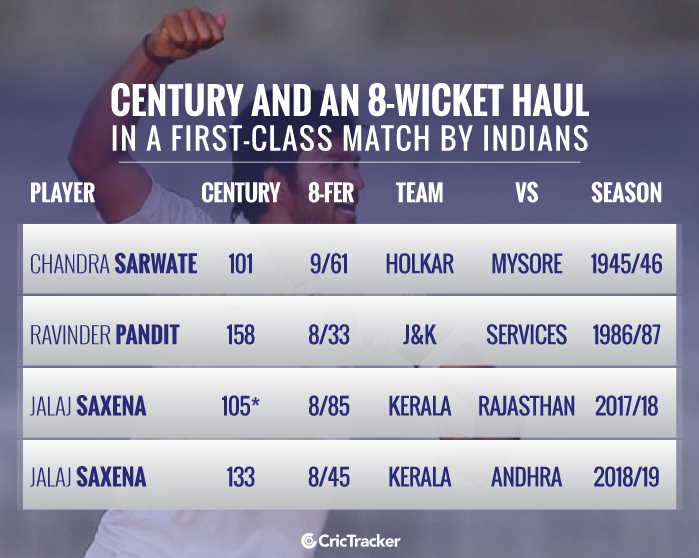 By scoring a century and piloting an 8-wicket haul in this game, Saxena became the first player to achieve this rare double on two different occasions in Ranji Trophy history. His first was in the previous season against Rajasthan also in Thumba. Prior to 2017, this double was achieved by only two Indian players in first-class cricket; Chandra Sarwate in 1945-46 and Ravinder Pandit in 1986-87.

Overall, Jalaj Saxena became only the 6th player in the history of first-class cricket to score a century and take an 8-fer in the same game on multiple occasions. All the previous five players had achieved this rare feat well before 1930 having featured in over 250 FC matches. The game against Andhra was Saxena’s 102nd FC game. Australia’s George Giffen, one of the two players to achieve this double on three different instances, featured in only 251 matches in his first-class career.

Giffen had done it thrice in his 135th game. Another Australian in this list, Frank Tarrant, achieved both his doubles outside Australia. During the game against Andhra, Saxena also completed 5000 runs in Ranji Trophy. He thus became only the 7th player with 5000 runs and 200 wickets in the history of the tournament. Saxena needed only 84 matches to achieve this double; the 3rd fewest number of games for any player.

A century and an 8-wicket haul in a first-class match on most occasions: 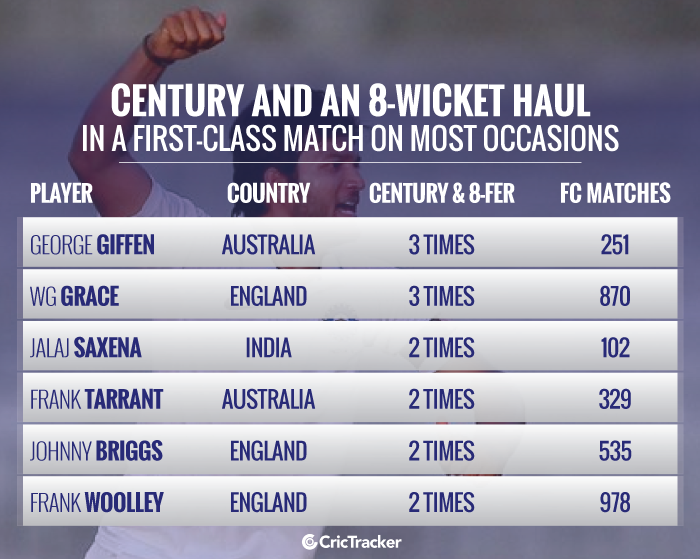