Jason Holder ended up with the bowling figures of 6/42 in Southampton.

Jason Holder was all over the England batting on the second day of the Southampton Test as the hosts were bundled out for just 204 in their first essay. Shannon Gabriel took the first three wickets of the innings before Holder ran through England’s middle-order and ended up with a 6-wicket haul. The skipper picked up six consecutive wickets to fall of England including the likes of Ben Stokes and Jos Buttler. The last man to be dismissed was James Anderson in the bowling of Gabriel.

The WI captain ended with bowling figures of 6/42 in the 20 overs which are his best figures in any format. These figures find 4th place in the list of best bowling figures by a West Indies captain in Test cricket. This was the 2nd time Holder picked a 6-fer as captain in Test cricket as he finished with figures of 6/59 during the 2018 Kingston Test against Bangladesh. Courtney Walsh has three 6-wicket hauls as Test captain of West Indies including two of the top three best figures. 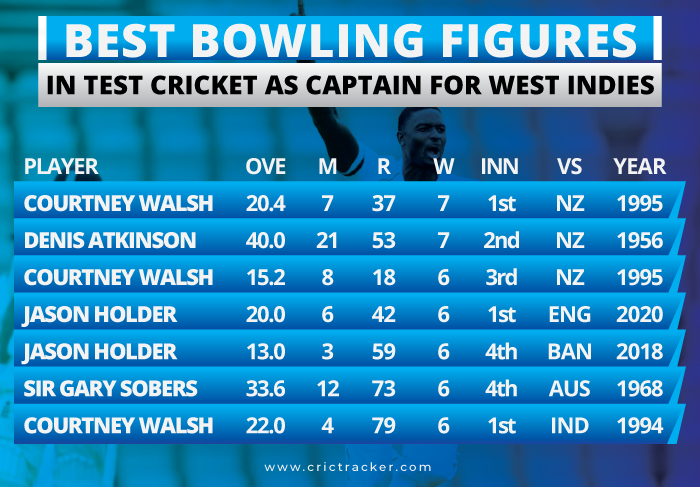 The 6/42 in Southampton was Jason Holder’s 7th 5-wicket haul in Test cricket with all of them coming while leading the West Indies team. These are now the most number of 5-fers in Test cricket for a West Indies captain equaling Courtney Walsh. Overall, only three captains have picked up more 5-fers in Test match cricket than Holder. Imran Khan is placed at the top of the list with 12 hauls of 5+ wickets in the 48 Tests as Pakistan captain while no other has even ten 5-fers as captain alone. 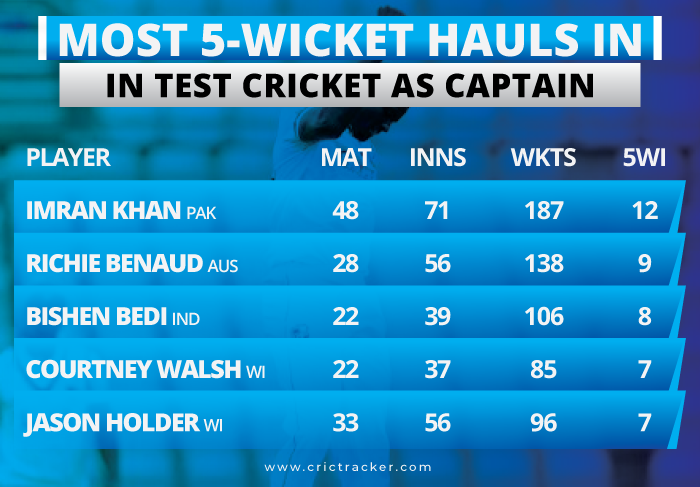 Holder now has 96 Test wickets as captain and is only four away from becoming the first West Indian and overall the 9th player with 100+ Test wickets as skipper. In fact, the next wicket Holder picks in this series will be his 200th International scalp as captain. Thursday’s performance by Holder helped him to register his 9th 5-wicket haul in International Cricket as the West Indian captain which includes two 5-fers in the ODI format.

Jason Holder, the No.1 ranked all-rounder in Test cricket, is now only the 3rd captain in International Cricket history to claim as many as nine 5-fers. Imran Khan leads this list as well with the 12 5-wicket hauls which all came in Test cricket only. Richie Benaud shares the 2nd place in the list for the nine 5-fers he has taken across 28 matches only. 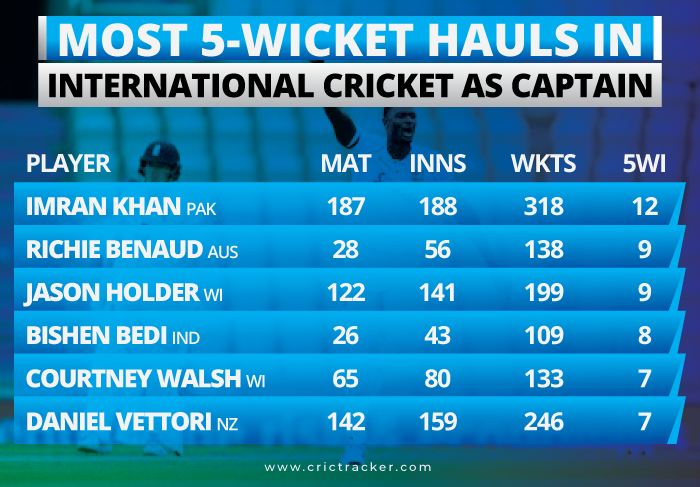