Lungi Ngidi, the South African fast bowler, had a horrendous outing on Tuesday, September 22, representing the Chennai Super Kings (CSK) against the Rajasthan Royals. The pacer went for as many as 20 runs while bowling the last over of the RR innings at the Sharjah Cricket Stadium. In four overs, he ended up conceding as many as 56 runs at an economy of 14.

Before the last over, he had given only 26 runs at an economy of 8.67 and was expected to turn with an impressive show. However, he crumbled to the pressure as Steve Smith and Co amassed 216 for seven on the board. Jofra Archer took him to the cleaners, scoring 27 runs off a mere eight balls with the help of four sixes. He went at a staggering strike-rate of 337.50.

In the last over, Archer tonked Ngidi for a couple of massive sixes. It put pressure Ngidi under pressure and he bowled a couple of no-balls thereafter. To add to his agony, the no-balls went for sixes, making it 26 off the first two balls of the over. In the next ball, Lungi went for an attempted slower-delivery, but got it wrong altogether. He ended up conceding a wide.

At that point in time, Chris Gayle’s record was in danger. Playing for the Royal Challengers Bangalore (RCB), Gayle had scored 37 off one over against Kochi Tuskers Kerala’s Prashanth Parmeshwaran. However, to his relief, he didn’t make the dubious record his own. In the last four balls, he gave away only three singles. However, by then, the damage was already done.

With the over, Lungi equaled the record for the highest runs conceded in the 20th over in the history of the Indian Premier League (IPL). Earlier in the match between Delhi Capitals and Kings XI Punjab at the Dubai International Stadium, Marcus Stoinis and Anrich Nortje scored those many runs.

The bowler on that occasion was Chris Jordan, England’s highest wicket-taker in T20Is. Back in 2017, Mumbai Indians’ Hardik Pandya took 30 runs off Ashok Dinda in the game against the defunct Rising Pune Supergiant.

Here are more details of the IPL record: – 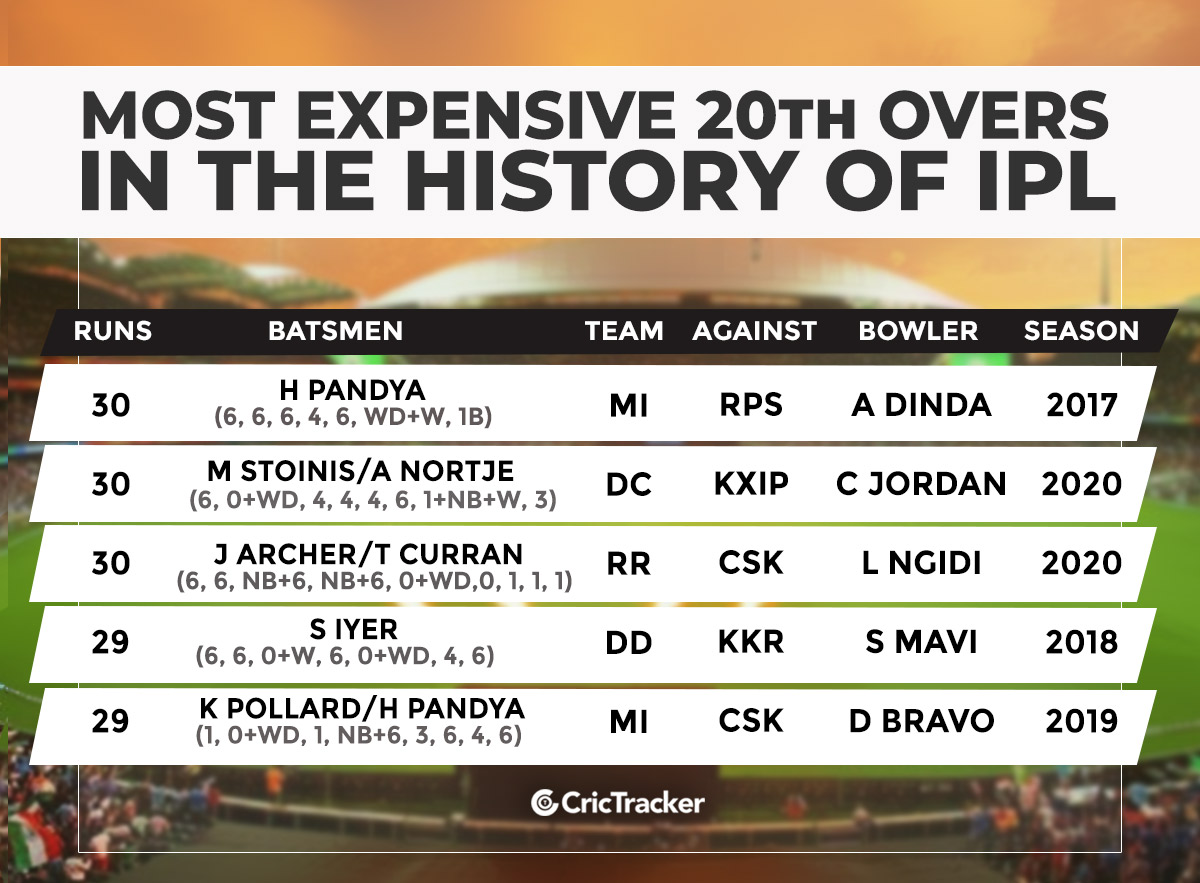