Kemar Roach took five wickets for eight runs in the five overs he bowled on the first day.

Kemar Roach had a rather quiet series against Sri Lanka as he ended up with only 11 wickets in the 3-match Test series at 25.54 compared to Shannon Gabriel and Jason Holder who bagged 20 and 12 wickets respectively averaging less than 17. The 30-year-old pacer came out all guns blazing in the first Test match against Bangladesh by running through their batsmen on the first day.

Roach and co utilized the green track after the hosts won the toss and decided to bowl first. The pacer drew the first blood when Tamim Iqbal edged one behind on the last ball of the 5th over. Roach ended his next over by cutting Mominul Haque’s stay to three deliveries. Bangladesh innings took a major dent in Roach’s 5th over when the senior middle-order trio returned to the pavilion bagging ducks.

Roach trapped Mushfiqur Rahim on the 2nd ball of the over and a review couldn’t save the former captain. Two balls later, the Bangladesh skipper Shakib Al Hasan edged one into slips while Mahmudullah ended up caught behind on the very next ball. Thus, Roach had a five-wicket haul in his bag by 4.5 overs with all those five wickets coming in the space of 12 deliveries. He walked off the field after missing out on a hat-trick dropping a realistic chance of taking all 10 wickets.

Roach had a five-wicket haul to his name by the 29th ball he bowled which is one of the ten earliest instances of a bowler taking a five-wicket haul in Test cricket. The fewest balls any bowler needed to take a five-fer in Tests after coming on to bowl was 19 deliveries on two different instances. Australia’s Ernie Toshack against India in the 1947 Brisbane Test and England’s Stuart Broad against Australia in the 2015 Nottingham Test had a 5-fer by the 19th ball they bowled. 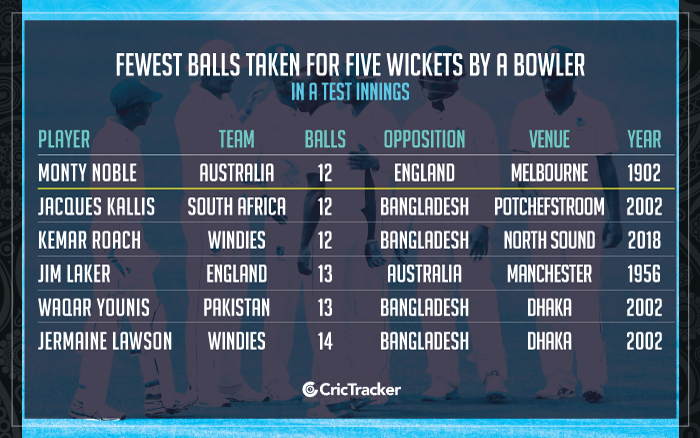