Stats: Most catches by a player in ODI cricket

Stats: Most catches by a player in ODI cricket

Adam Gilchrist, Mark Boucher and Kumar Sangakkara are three of the four players who have taken 300+ catches in this format.

MS Dhoni has been achieving records and milestones ever since he has been part of India’s ongoing tour of Europe that started with limited-overs formats. The former Indian captain featured in his 500th International match during the Cardiff T20I after breaking the record for most number of stumping in a T20I career during the first match. Later in the deciding T20I in Bristol, Dhoni became the first player in the history of T20I format to claim five catches.

India began the 3-match ODI series with a convincing 8-wicket win in the first game in Nottingham. The ongoing 2nd ODI played at the Lord’s is Dhoni’s 500th International game for India. The keeper-batsman has played 503 Internationals so far including three ODIs for the Asia XI in the 2007 Afro-Asia Cup. The England top order got starts but none expect Joe Root got a big score. In the 34th over, Hardik Pandya dismissed Ben Stokes caught behind for just five runs.

Couple of overs later, the inform Jos Buttler was dismissed for just four runs as he edged one behind from Umesh Yadav. This was the 300th catch in MS Dhoni’s ODI career with all of them when he was behind the stumps. Thus, Dhoni became only the 4th individual to pouch as many as 300 catches in the ODI format. Adam Gilchrist, Mark Boucher and Kumar Sangakkara are the other three players who have taken 300+ catches in this format and all have achieved this milestone as keepers.

Till date, as many as seven players took 200 and more catches in this format with Mahela Jayawardene (218) being the only fielder to achieve the feat. Brendon McCullum and Moin Khan have taken over 200 catches in their respective ODI careers behind the stumps. Among Indians, Rahul Dravid has taken the most number of catches in this format after Dhoni. This former Indian captain took 196 catches in ODIs including 72 as a keeper.

Most catches by any player in ODI cricket: (Keeper + Fielder) 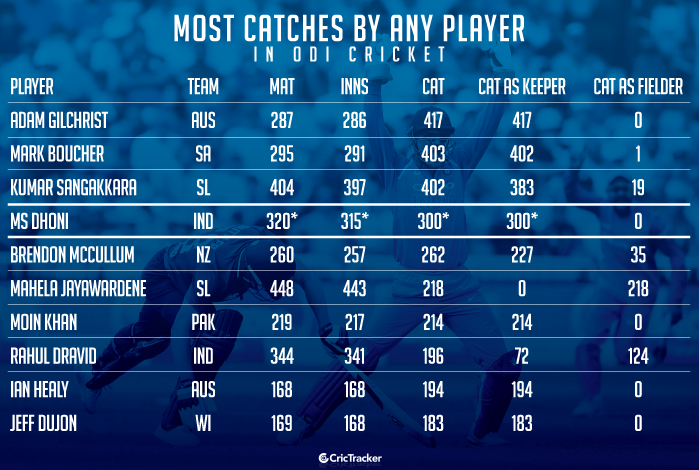