Stats: Most sixes by a player against a particular opposition in international cricket

Stats: Most sixes by a player against a particular opposition in international cricket

Ace India opener Rohit Sharma started in style in the second ODI against Australia in Adelaide but fell for 43 off 52 balls, giving his team a solid platform. Rohit hit a hundred in the first ODI in Sydney although it wasn’t enough for the visitors to overhaul the target of 289 and they fell short by 34 runs eventually. India though won the second game by 6 wickets to square the series 1-1 and both team will dash for the decider in Melbourne on January 18.

However, although India captain Virat Kohli stole the show in the second game by hitting yet another hundred – his 39th in the 50-over format – Rohit still scripted a record during the game and it was about hitting the most number of sixes against a particular opposition in international cricket.

The batsman had hit six sixes during his valiant chase in Sydney the other night and on Tuesday, he hit another two to take his tally of over-boundaries against Australia to 89 in just 53 matches and 55 innings. The second six in Adelaide took Rohit past Windies’ Chris Gayle who has 88 sixes in 61 matches and 74 innings against England.

The Mumbai batsman, who scored his 22nd ODI hundred in Sydney to equal former India captain Sourav Ganguly, has also hit 188 boundaries against Australia, which is though far less than 555 hit by legendary Caribbean batsman Viv Richards against England in 72 matches.

Afridi has hit most sixes against three opponents 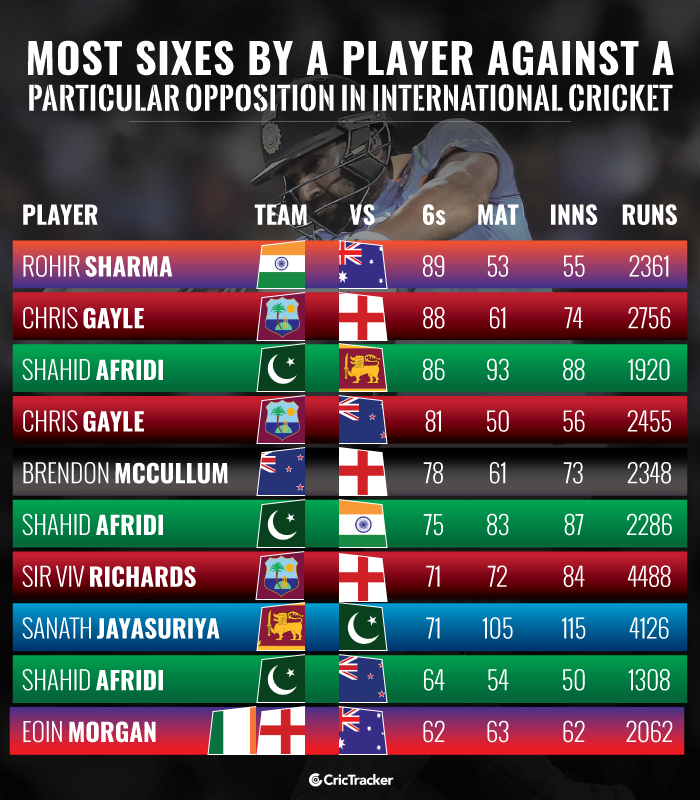