Dhoni got there in 273 innings and became the 5th fastest to the mark.

MS Dhoni has already earned the tag of a legend not only with his keeping abilities and captaincy achievements but also as a batsman which has been undermined in recent times. Dhoni has hardly gets a chance to bat especially in the ODI format given India‘s strength at the top, but the 2nd ODI at Lord’s the team needed his services after a collective batting failure. Batting with the lower-order all Dhoni could do was reduce the margin of defeat that too to a small extent. When on 33, Dhoni complete 10000 runs in his ODI career.

It wasn’t his first milestone of the day as the keeper-batsman completed 300 catches in this format and became the 4th player to do so. Dhoni is now the 12th player overall and only the 4th from India to complete 10,000 runs in ODI cricket. He got there in 273 innings which is slower than only four players. The former Indian captain could have well reached 10k ODI runs early had he faced enough balls in the previous few matches.

Dhoni’s last ODI fifty came in the 2017 Dharamsala ODI against Sri Lanka where he scored 65 coming to bat in dire situations. Since then he batted only six times in ten ODI matches scoring 109* runs (when on 33). The 320 matches he took are the 4th most among the 12 players but stands at No.5 in fastest in terms of innings. The fastest among the lot is Sachin Tendulkar who achieved the milestone in 259 innings and 266 matches.

Sourav Ganguly and Ricky Ponting complete 10k ODI runs in 263 and 266 innings respectively while Jacques Kallis took 272 innings. Had Dhoni got enough balls to face in the previous few outings in this format, he could have reached 10000 runs quicker than the South African all-rounder. Mahela Jayawardene is the slowest to reach this mark having taken 333 innings. His fellow Sri Lankan Sanath Jayasuriya (328) is the other player to bat in more than 300 innings for 10000 runs. 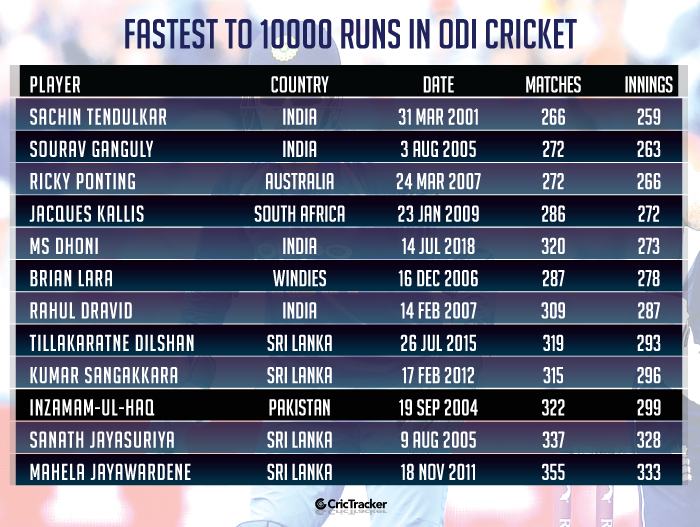