All the stats and numbers that MS Dhoni recorded with his wicket-keeping in the Final.

MS Dhoni’s wicketkeeping has hardly come under the scrutiny irrespective of his form with the bat throughout his career. The senior pro once again showed his experience in the crucial stage as he affected two crucial stumpings in the ongoing Asia Cup final. Bangladesh got off to a flyer putting on a 120-run opening partnership.

Liton Das, who failed in this tournament, scored his first fifty-plus score in the ODI format and converted it to a big one. His innings of 121 runs came to an end thanks to some quick glove work from Dhoni behind the stumps. In the very next over of Kuldeep Yadav, Dhoni sent Mashrafe Mortaza back to pavilion who tried to go for a maximum second time in four deliveries.

All the stats and numbers that MS Dhoni recorded with his wicket-keeping in the Final:

11 – MS Dhoni has affected 11 stumpings in Asia Cup which are the most by any keeper surpassing Kumar Sangakkara’s nine. Dhoni’s stumpings tally increases to 12 in the Asia Cup when including the numbers from the T20 edition.

131 – With the first of the two stumpings in this game, Dhoni went past Steve Rhodes in the list of most stumpings by a keeper in List A cricket. He now stands at second place in this list behind Moin Khan’s 138.

516 – Dhoni now has 516 dismissals in List A cricket under his belt as a wicketkeeper which is the 6th most by any player in this format. He went past Paul Nixon’s 515 with the two dismissals in this match.

800 – With the stumping of Mashrafe Mortaza, Dhoni completed 800 dismissals in International cricket. Thus, he became first Indian and only the third player to affect 800 dismissals across all formats. Mark Boucher and Adam Gilchrist are ahead of Dhoni with 998 and 905 dismissals respectively.

Most dismissals as a wicketkeeper in International cricket: 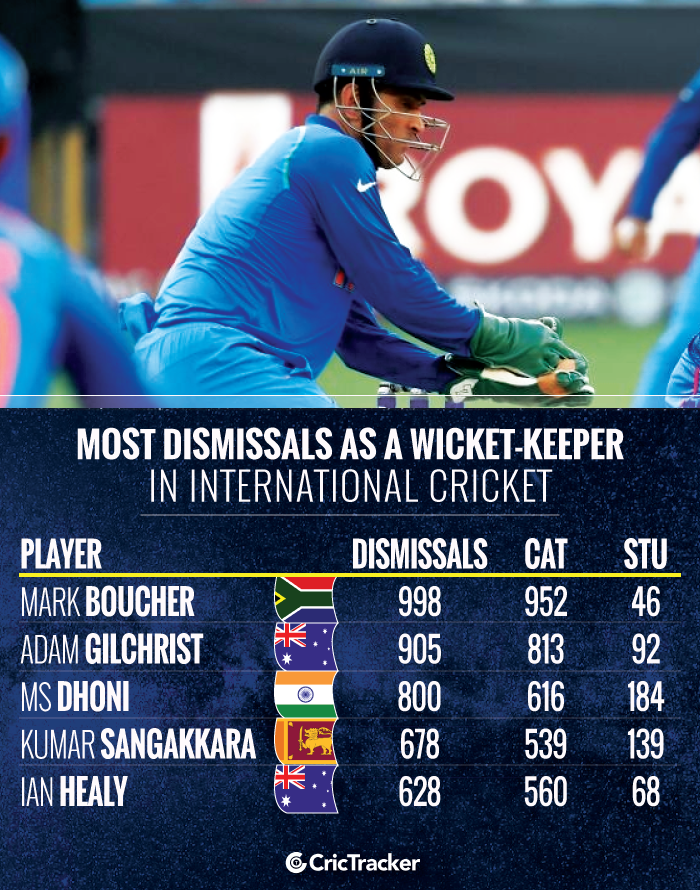