Three Indians in the top five.

Indian batsman Rohit Sharma has been a fulcrum of the Indian team for the last few years, especially in the last few years. Earlier, he used to be someone who used to throw his wicket away to rash strokes, but gradually, he has improved as a cricketer and has become a dependable figure in the lineup. The Nagpur-born player is currently playing in the five-match ODI series against Windies.

He has had a reasonable series thus far with the bat in hand. In the first match in Guwahati, he scored 152 not out and helped his track down 323. The seasoned campaigner couldn’t weave his magic in the next couple of matches in Visakhapatnam and Pune respectively and got out for 4 and 8 early in the innings. However, he came back to make amends in the fourth ODI in Mumbai.

At Brabourne Stadium, Rohit plundered 162 runs from 137 balls with the help of 20 boundaries and four sixes. In the meantime, the 31-year-old also accomplished his 21st century in the 50-overs format. His stupendous knock was eventually cut short by off-break bowler Ashley Nurse. The right-handed batsman also entered the record books courtesy of the jaw-dropping knock.

He became the fourth fastest to reach the milestone of 21 ODI centuries in merely 186 innings. He features above the legendary Sachin Tendulkar, who did the same in 200 innings. 29-year-old Delhi-born cricketer Virat Kohli, the Indian captain, has been in phenomenal form of late. He is second on the elite list, having made own the feat in merely 138 innings.

Topping the list is South African batsman Hashim Amla, who reached the milestone of 21 tons in his 116th innings. The list has another Proteas cricketer in AB de Villiers and he accomplished it in 183 innings. While de Villiers and Sachin have already retired, Amla, Kohli, and Rohit will get chances of racking up more records under their belt.

Here are the statistics 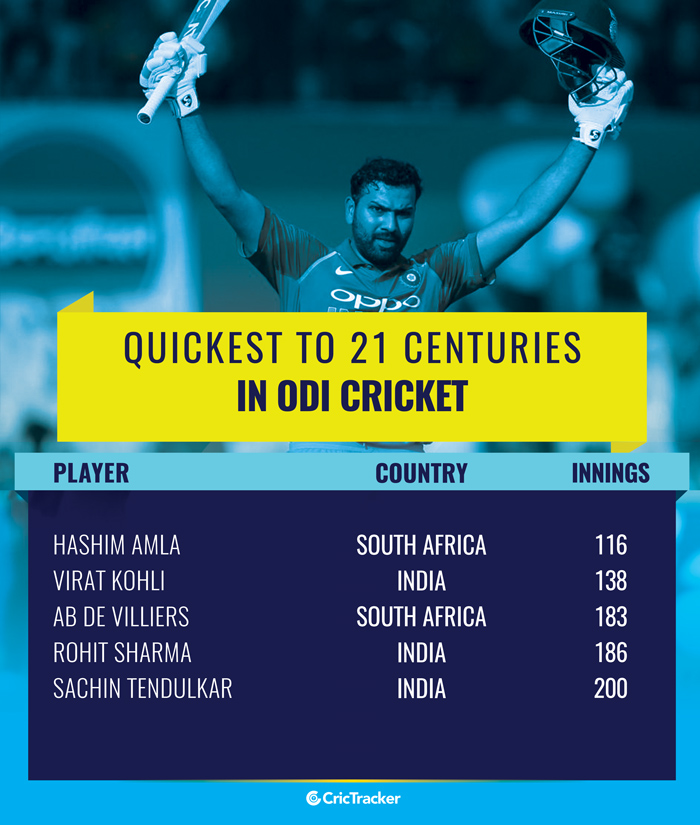