Rashid Khan completed 100 wickets in ODI cricket with the wicket of Shai Hope.

Rashid Khan didn’t take any longer to stamp his authority in International cricket as the Afghanistan bowler kept improving his record irrespective of the opposition he faced. The 19-year-old didn’t have best of starts to the World Cup Qualifiers as he failed as a captain and bowler as Afghans lost three straight games. However, with other game results and some good performances helped them to make it to the 2019 World Cup. The youngster played a crucial role in Afghanistan‘s winning spree with important wickets.

In the final of the tournament against Windies, Rashid Khan trapped the crucial Shai Hope in his 2nd over to push the Caribbean team into tatters. With this wicket, Rashid completed 100 wickets in ODI cricket. He finished the previous game against Ireland with 99 ODI wickets in which he took three wickets. The leg-spinner needed only 44 games for the milestone to become the quickest.

Fastest to complete 100 wickets in ODI cricket: (In terms of matches) 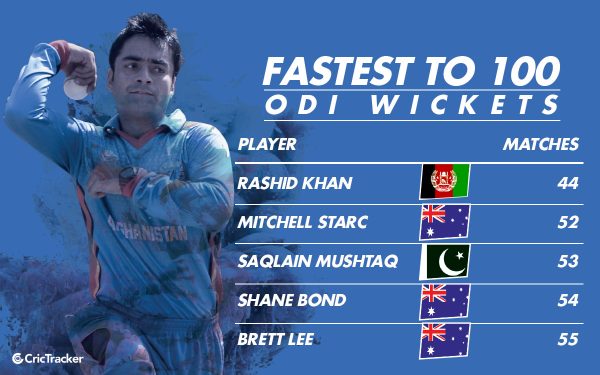 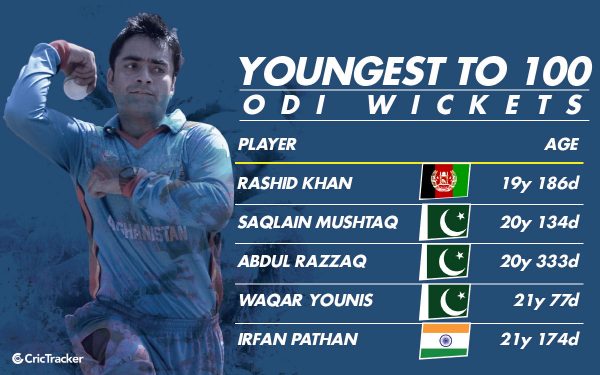 Saqlain is the quickest to 100 ODI wickets taking only one year and 225 days in terms of time duration. India‘s Irfan Pathan (2y 100d) is the only other to complete 100 wickets in this format in smaller span than Rashid Khan.