Rohit Sharma scored 65 off 40 balls in the Hamilton T20I.

Rohit Sharma did not have the greatest of starts to the New Zealand tour as he was dismissed for 7 and 8 runs respectively in the first two T20Is. Rohit’s inconsistency with the bat in the T20I cricket was widely discussed as the Indian opener has either been producing a big knock or getting out inside the first couple of overs. However, the 32-year-old bounced back strongly at the Seddon Park where he top-scored in India’s total of 179/5.

Rohit smashed six fours and three sixes on the way to 40-ball 65 which was his 24th fifty-plus score in this format. He shared an 89-run opening stand with the in-form KL Rahul in only nine overs. The partnership played a key role in pushing India to a solid total which seemed to be slowing down in the latter half. The Indian limited-overs vice-captain completed 10000 runs as an opening batsman during this innings.

He thus became the 21st player overall and only the 4th Indian to aggregate 10000 while opening the batting. Rohit, who scored only 15 runs in the first two matches, needed 48 runs for this milestone before the Hamilton T20I. He got there with a six off Hamish Bennett in the 6th over with which he brought up his fifty. Sharma hit 26 runs across five balls in that over which helped him to reach his half-century in only 23 balls.

Rohit Sharma needed 219 innings for this milestone; the 2nd fewest for any of the 21 players. Sachin Tendulkar remains the fastest to this milestone as he needed only 214 innings. Rohit, however, is the only opener to average 50+ as on today after scoring 10000 International runs. Another Indian opener Sunil Gavaskar stands 4th in the list reaching 10000 International runs as an opener in 233 innings. Graham Gooch is ahead of Gavaskar in the list having got there in 228 innings only.

Rohit has a clear lead in terms of innings batted in the lists of fastest to ‘n’ runs as an opener in ODI cricket. However, his inconsistency at the top in the T20I format pushed him back in the list which reads across formats. With Rohit opening in Test cricket as well, there is a possibility of him scoring big runs if he gets going like during the home series against South Africa last year.

Quickest to 10000 runs as an opener in International cricket: 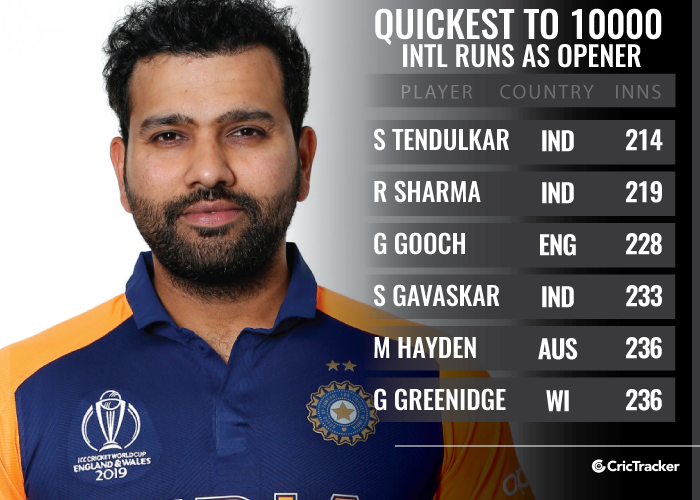