Bangladesh are presently locking horns with the Windies at the North Sound in the first of the two Test matches. The hosts drew their previous Test series versus Sri Lanka and were touted to be the favorites ahead of their series versus Shakib Al Hasan and Co. In the first day, they have stormed into the ascendancy as Jason Holder’s men bowled the Tigers out for a mere 43 runs.

Kemar Roach spewed venom and churned out a spell of 5-1-8-5, which ripped the heart out of their opponent’s batting lineup. Roach nipped out Tamim Iqbal in the fifth over and then pinned Mominul Haque in his next over. He delivered three body blows with the wickets of Mushfiqur Rahim, Shakib, and Mahmudullah in the ninth over to help his team dictate terms to their rivals.

He limped off the park after which Holder and Miguel Cummins brushed off the tail to bowl Bangladesh out for 43 runs. Moreover, the innings lasted only 18.4 overs (112) which ranks in the dubious list of shortest innings by a team in terms of balls faced. It was also Bangladesh’s lowest score in the longest format. They are placed in the seventh position of the table.

Australia features four times. Their shortest innings came way back in 1936 versus England at the Gabba in Brisbane. In 2011, South Africa shot them out for 47 in 18 overs. Four years later, Stuart Broad’s stupendous spell helped England bowl out the Aussies at the Trent Bridge in Nottingham for 60 in 18.3 overs. Their other debacle came in 1986 at the iconic Lord’s Cricket Ground. 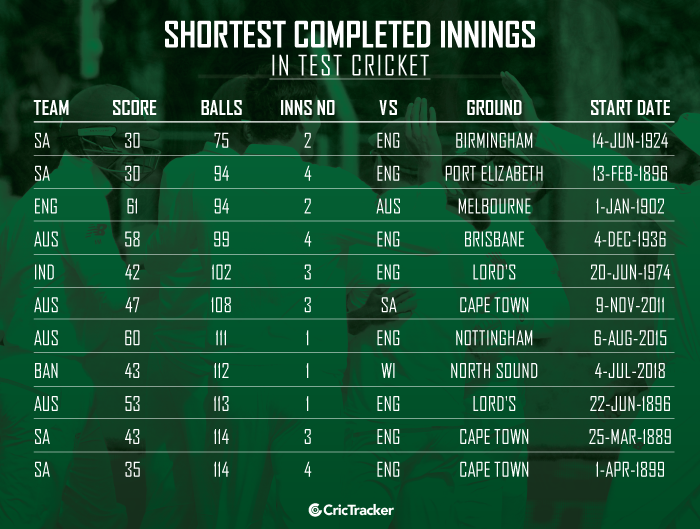