Karunaratne became only the 4th player to carry the bat for Sri Lanka in Test cricket.

Dimuth Karunaratne shouldered Sri Lanka’s hopes in the first of the 2-match Test series against South Africa as the opening batsman carried his bat through the team’s innings on the first day. The left-hander scored an unbeaten 158 to help Sri Lanka finish with 287. Though there were no big partnerships in their innings, Karunaratne stitched small 30-40 partnerships to post a fighting total on a turning track.

The home team began well scoring at four runs an over in the first hour as Karunaratne added 44 for the first wicket along with Danushka Gunathilaka. Sri Lanka kept losing wickets regularly in the 2nd session and were reduced to 176/8 when Karunaratne was hanging in the 90s. However, a 48-run stand with skipper Suranga Lakmal and 63 for the final wicket along with Lakshan Sandakan helped the opener convert it into a big knock.

Sri Lankan openers who carried their bat in Test cricket: 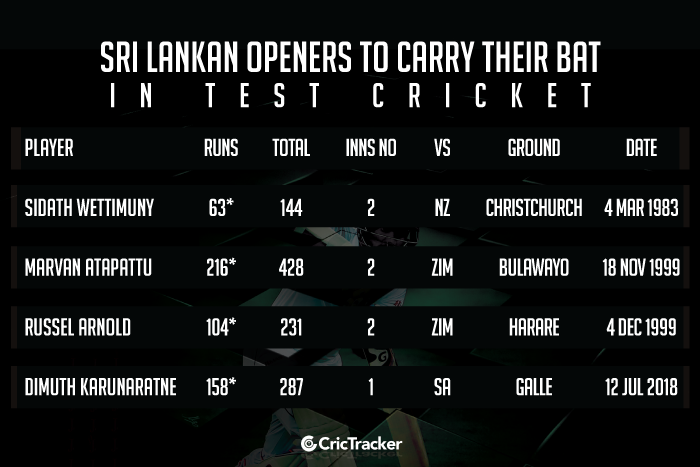 Thus, Karunaratne became only the 4th player to carry the bat for Sri Lanka in Test cricket and first since 2000. Sidath Wettimuny was the first Sri Lankan to achieve the feat when he was unbeaten on 63 in the 1983 Christchurch Test while his side were bowled out for just 144. Marvan Atapattu and Russel Arnold carried their bats in the 1999 Test series in Zimbabwe. Atapattu scored an unbeaten 216 in the first Test of the series while Arnold scored 104* in the final game.

Karunaratne is also the first Sri Lankan to carry his bat in a Test match at home. Two Indian players have carried their bats in Test cricket in Sri Lanka. Virender Sehwag in the 2008 Test match also in Galle and Cheteshwar Pujara in the 2015 Colombo Test batted through their innings against the hosts. Karunaratne’s unbeaten 158 is his 8th century in Test cricket and his 4th score of 150 and more. He missed out on a double century last year against Pakistan where he scored 196.

Openers to carry their bat in Test cricket in Sri Lanka: 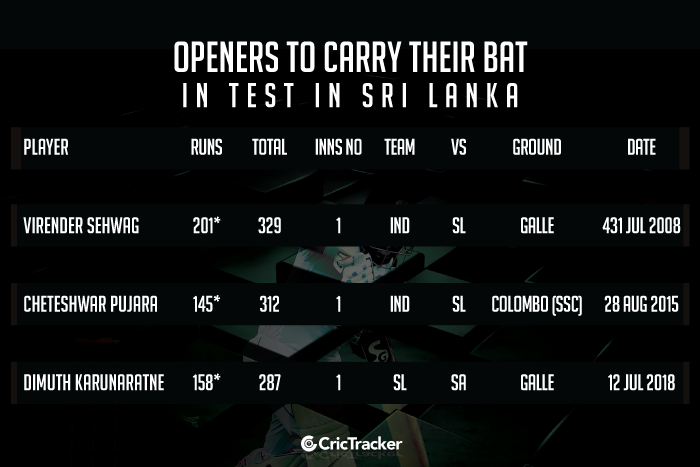