Suresh Raina had 7989 runs in the Twenty20 format heading into his 300th game.

Suresh Raina is undoubtedly one of the greatest T20 players to have come from India and in fact among the greatest in the whole World. Raina is among the earliest players to gain the tag of match winner in this format and is part of a rare breed that can be referred to as T20 specialist from the country. The left-hander scored the first T20I hundred for India that too in a World T20 game against South Africa. Raina finds his name at the top in almost all batting lists in the Twenty20 format.

The 32-year-old is featuring for his state team Uttar Pradesh in the ongoing Syed Mushtaq Ali T20 Tournament. In their second game, Raina contributed an unbeaten 54 against Hyderabad to help UP chase down 140. He scored 54 from 35 balls with four fours and three sixes. With the first of his three maximums, Raina became only the 2nd Indian to hit 300 sixes in T20 cricket after Rohit Sharma.

On Monday, Raina featured in the 4th straight match for UP in the tournament which was played against the debutant team Puducherry at the Palam Ground in Delhi. This game was marked to be the 300th appearance in the Twenty20 format for Raina. Thus, he became only the 2nd Indian to feature in 300 T20 matches. MS Dhoni was the first to this feat while playing in New Zealand earlier this month during the series decider in Hamilton. Rohit Sharma is currently on 299 T20 matches to his name.

Raina completed another milestone with the bat in the game against Puducherry. He scored only 12 runs but that was enough for him to become the first Indian to accomplish the mark of 8000 runs in Twenty20 history. He is overall the 6th player to put up as many as 8000 runs in the Twenty20 format. Raina has four centuries and 48 fifties to his name in this format. Pakistan’s Shoaib Malik is the only other player from Asia to score 8000+ T20 runs. 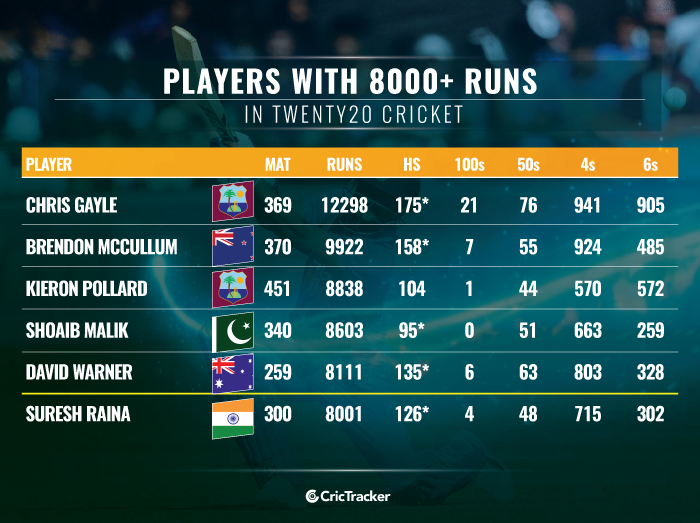 Shefali Bagga talks about some of her starstruck moments with cricketers