Here are all the major stats and numbers that define Suresh Raina’s career with Chennai Super Kings.

Suresh Raina took a hard decision of opting out from the 2020 Indian Premier League (IPL) due to the personal issues. This gives us a tough viewing of the Chennai Super Kings without Raina in the playing XI which has been almost a non-existent thing. Raina has been part of all the ten editions of the IPL which CSK played and also editions of the now discarded Champions League T20 (CLT20). There are speculations stating Raina’s pulling out could also lead into his 12-year partnership with CSK coming to an end for whom he had a lot of achievements and memories to cherish.

Here are all the major stats and numbers that define Suresh Raina’s career with Chennai Super Kings:

1 – Suresh Raina holds the record of most matches, most runs, most 50+ scores, most boundaries and most catches for Chennai Super Kings in the IPL and also across all Twenty20 matches. 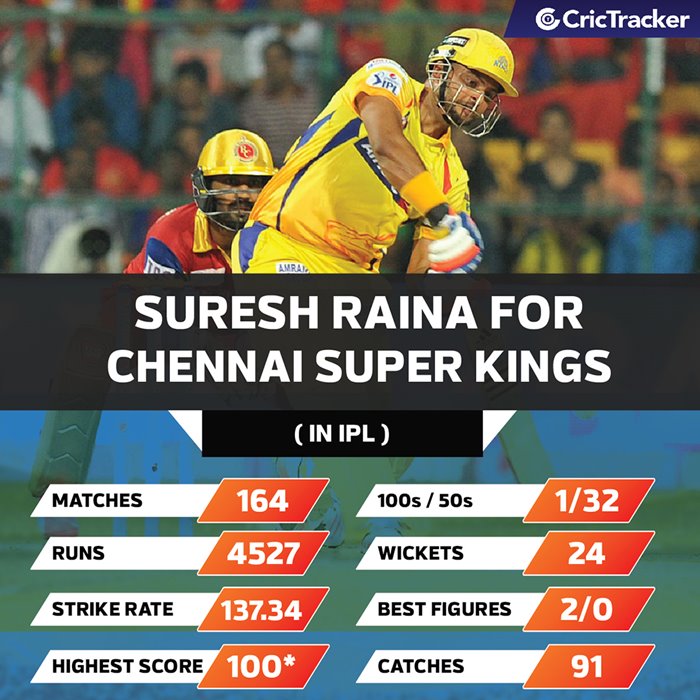 1 – Raina has missed only one match of the Chennai Super Kings in the IPL/Twenty20 format thus far. He was ruled out of the away fixture against the Kings XI Punjab in 2018 after he suffered a calf injury in an earlier game.

10/10 – Suresh Raina has scored at least 350 runs in all the 12 editions of the IPL including ten of them where he played for the Chennai Super Kings. His lowest season aggregate was 374 in 2015 and scored only 383 runs across 17 games in 2019. These two are the only seasons with CSK where Raina failed to reach 400-run mark in the IPL.

16 – Raina’s 16-ball fifty in the 2014 Qualifier against Kings XI Punjab is the only fifty of CSK in the IPL which came in less than 20 deliveries. MS Dhoni also hit a 16-ball fifty for CSK against SRH in 2013 but during the CLT20.

103 – Raina has claimed a total of 103 catches for the Super Kings in the Twenty20 format. His tally is the highest for a player (fielder/keeper) in T20 cricket for a single team. Raina was the first player in T20 cricket to have taken 100 T20 catches for a team and was replicated by Steve Croft (102) of Lancashire.

109* – Raina smashed an unbeaten 109 in the CLT20 final which is his highest T20 score for CSK. It is also the only century by an Indian and the only hundred recorded for an IPL franchise in the CLT20 history.

134 – Raina featured in 134 matches on the trot in the IPL for CSK before he missed the 2018 fixture against KXIP. This is the longest spree by a player in the IPL without missing a match for a franchise. Rohit Sharma came close to breaking this record having played 133 IPL matches in a row for Mumbai Indians from his debut in 2011 before missing a match against KXIP at home. 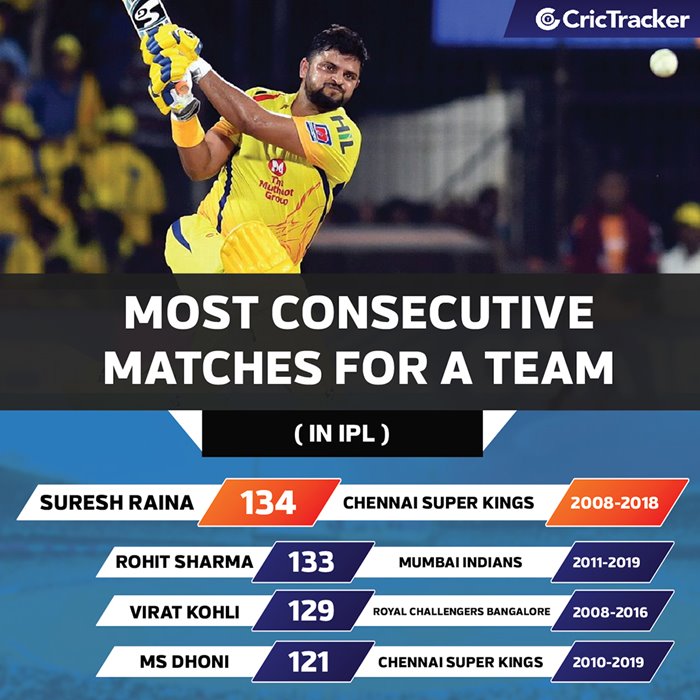 158 – Suresh Raina featured in each of CSK’s first 158 matches in the Twenty20 cricket which are the most consecutive appearances made by any player for a team in the T20 format. 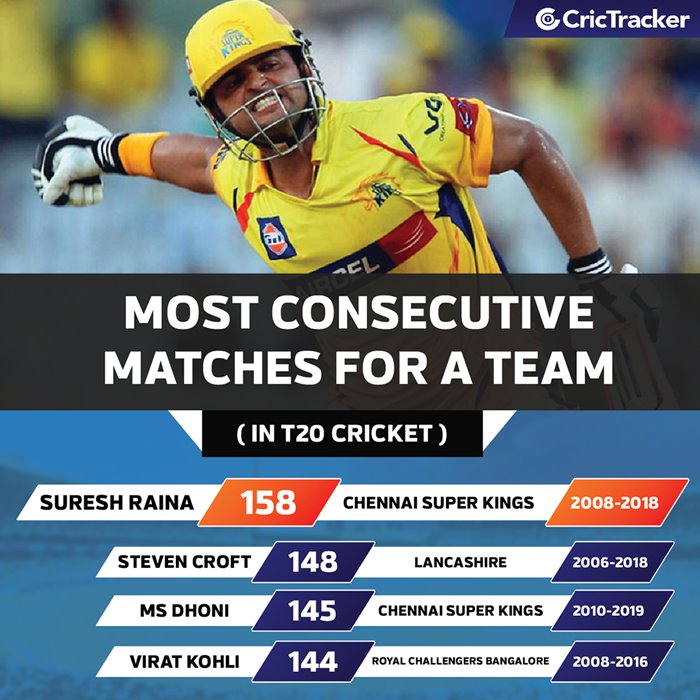 188 – Suresh’s 188 appearances in the Twenty20 format for CSK are the most by any player and the 3rd most by any player for an opponent. James Hildreth (196) is inching close to become the first player to feature in 200 T20s for a team in the ongoing T20 Blast while Virat Kohli is next on the list with 192 appearances. 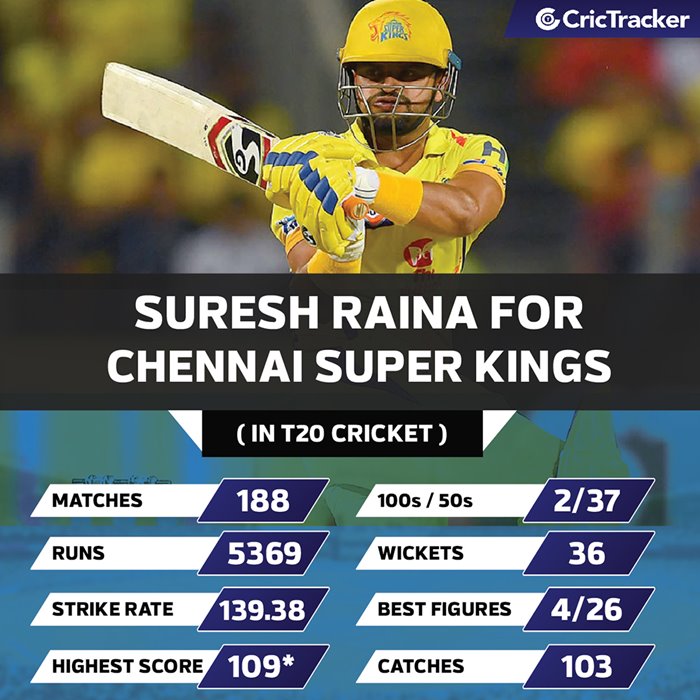 842 – Raina aggregated 842 runs in the CLT20 for Super Kings across 24 matches with a century and five fifties. Raina’s 842 runs and his six 50+ scores are the most for any player in the history of CLT20.