Virat Kohli completed 11000 runs as Indian captain when he scored his first run in the Pune T20I.

Virat Kohli has begun 2020 in the same fashion as he went through 2019 – breaking old records and creating new ones with every passing match in Indian colours. There was no play in Guwahati after the toss but in Indore, Virat came out to bat at No.4 with India in the driver’s seat during the chase. With the very first run, he became the leading run-getter in Men’s T20Is surpassing Rohit Sharma. When on 14, Kohli became only the 2nd player in Twenty20 history to aggregate 5000 runs as captain.

Soon, he raced to an individual score of 24 with a couple of boundaries against Lasith Malinga. He thus completed 1000 runs in T20I cricket as skipper and became the fastest to the milestone as he needed only 30 innings for the feat. He finished off the chase by smashing a maximum. In the 3rd T20I played in Pune, Kohli dropped himself to No.6 as he wanted other batsmen to get a chance.

With the first run in this game as well, Virat Kohli achieved a milestone in his International career. It was his 11000th run as captain of India across all the three formats in International Cricket. Virat Kohli, in this process, became only the 6th player to amass 11000 runs as captain in Internationals. He is only the 2nd player from India to achieve the feat after MS Dhoni. Kohli needed only 196 innings for this milestone; the fewest innings required for any of the six players.

He thus broke Ricky Ponting’s record by taking as many as 56 innings fewer than the former Australian skipper. No player has even scored 9000 International runs as captain in the innings that Virat needed for reaching 11000 runs. It was only last year in August that Kohli completed 10000 runs while leading the Indian team. Virat is already the fastest to 4000, 5000, 6000, 7000, 8000, 9000 and 10000 runs as captain in International Cricket.

With every passing milestone, the difference between Kohli and the 2nd best has kept on increasing. By end of the 2019/20 season, Kohli could likely to find himself 3rd in the list of leading run-getters in International cricket as captain. He would then be only behind Ricky Ponting (15440) and Graeme Smith (14878). Kohli is currently on 11025 runs as Indian captain and is only 183 runs away from surpassing MS Dhoni’s 11207-run tally.

Fastest to 11000 runs in International cricket as captain: 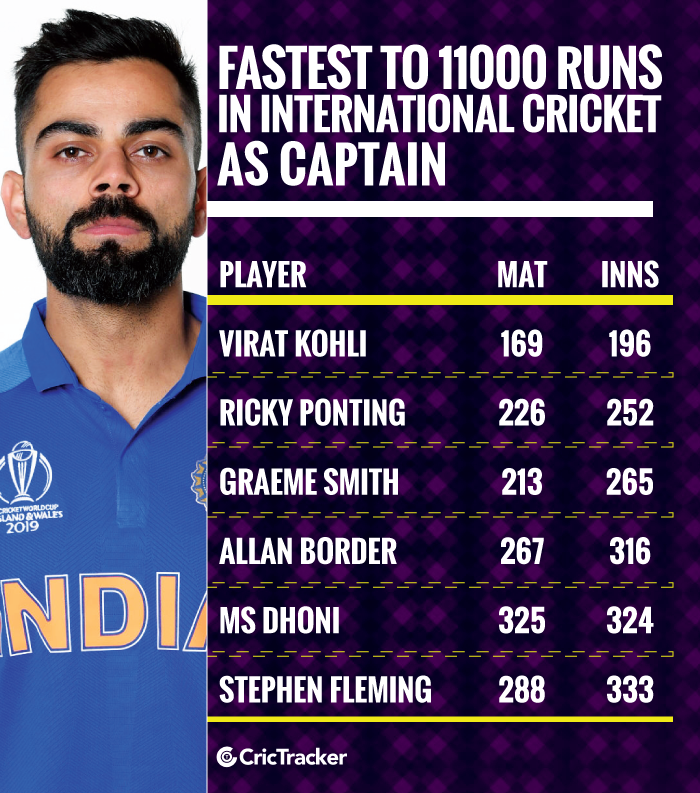