During the first innings of this game, Kohli got to 6000 runs in Test cricket.

Virat Kohli once again stood in between England and a series win as he scored a fighting fifty on the 4th day’s play while chasing a target of 245 to level the series. India were put into early troubles by the hosts as they dismissed India’s top three for 22 runs. He stitched a 101-run partnership with Ajinkya Rahane as India got halfway through the chase. Kohli was dismissed at the score of 123 by Moeen Ali when a delivery from the off-spinner went into short-leg fielder’s hands after clipping his glove.

In the over before getting out, Kohli moved to an individual score of 58 runs with a boundary towards the fine-leg region. With that shot, he completed 4000 runs in Test cricket as captain of this Indian team. In this process, he also became the first Indian and overall the 10th player with 4000 runs in the longer format while leading the side. Earlier, during the first innings of this game, Kohli got to 6000 runs in Test cricket becoming the 10th Indian and the 2nd fastest among them.

He completed 4000 Test runs as the Indian skipper in 65 innings which is the fewest among the ten players to reach this milestone. He is also the fastest in terms of matches taken as the Southampton Test was his 39th as captain. The previous fastest to this milestone was the West Indian captain Brian Lara who got to 4000 Test runs in 71 innings in the 40 Test matches. New Zealand’s Stephen Fleming took 108 innings for this milestone; the slowest among all.

The No.4 batter was a slow starter in the Test cricket but has been among runs from the moment he first led India in this format. He got to 1000 Test runs as captain in 18 innings and took 16 innings apiece to score sets of 1000 runs. The Indian captain became the 5th fastest to 3000 Test runs in 50 innings last year. He raced to 4000 Test runs as captain from 3000 runs in only 15 innings despite playing 14 of them being in England and South Africa.

Fastest to 4000 runs as captain in Test cricket: 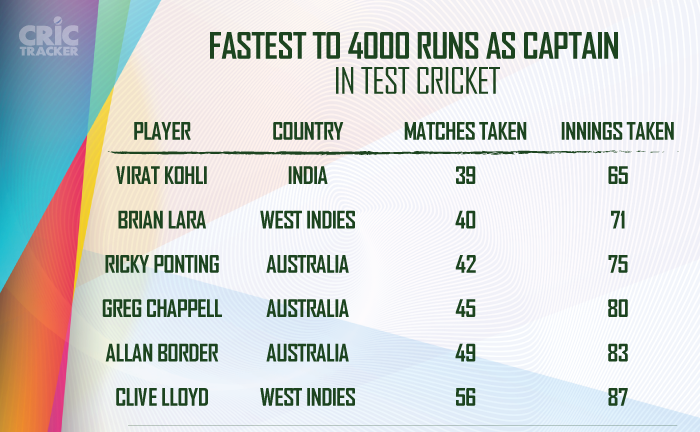