Virat Kohli's progression in the Test cricket is one of the best we've witnessed in the history.

It did take time for Virat Kohli to establish himself in the Test cricket but once he was through the initial hurdle, the Indian run-machine has now taken giant steps towards becoming one of the greatest players in this format. Kohli has constantly raised his game by doing whatever people thought was beyond his abilities. He didn’t score a double ton until his 41st Test match but once he broke that barrier, he scored six in the span of 22 matches.

His Test match credentials were widely questioned after the 2014 tour of England after which he made a mark in every country he played including in England. In the ongoing 5-match Test series, Kohli has scored two centuries and two fifties in three games thus far. In the 4th Test in Southampton, he walked out to bat on the 2nd morning after the dismissal of Shikhar Dhawan. The Indian skipper opened his innings with a boundary and his 2nd boundary got him to 6000 runs in the Test cricket.

Fastest to 6000 runs in Test cricket among Indian players: 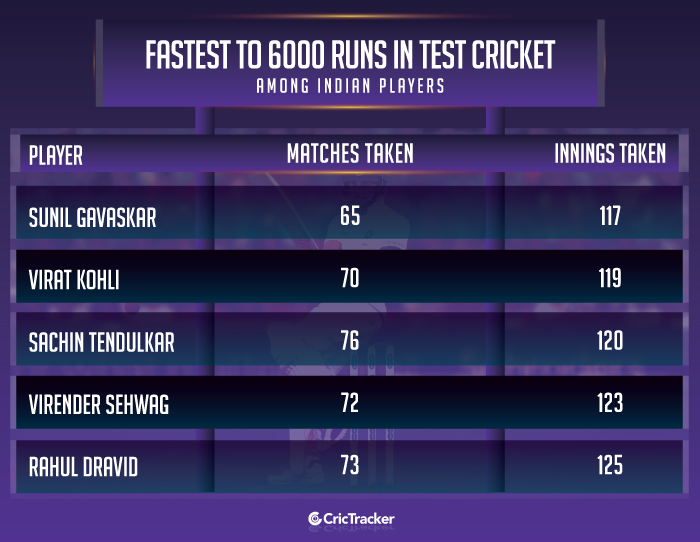 Virat Kohli’s progression in this format is one of the best anyone would witness. The Indian batsman needed 27 innings for his first 1000 Test runs and got to 2000 in 26 more innings due to the poor series in England. He went past 3000 runs in 20 more innings and bettered it scoring his next 1000 runs in only 16 innings. Kohli took exactly 16 innings to get from 4000 to 5000 runs in this longer format. Once again, he bettered himself reaching 6000 in 119 innings; taking only 14 knocks from 5000.

By completing the 6000-run milestone in 119 innings, Kohli became the 2nd fastest among the Indian players. Former Indian opener and skipper Sunil Gavaskar took only 117 innings to reach there. He got to 6000 Test runs quicker than Sachin Tendulkar by one inning. Overall, Kohli is the 9th fastest player to complete 6000 runs in this format. Sir Donald Bradman got there only in 68 innings while no other player scored that many runs in fewer than 110 innings.

Quickest to 6000 runs in Test cricket: 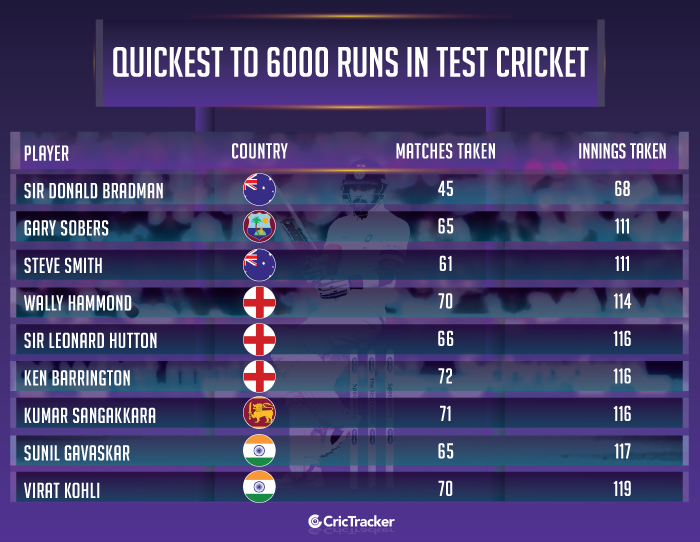