Virat Kohli continued his streak of creating at least one record in every game in the 3rd ODI. Windies posted 283 for the loss of nine wickets in the crucial game in Pune. After Rohit Sharma’s early dismissal Kohli put on a couple of crucial stands along with Shikhar Dhawan and Ambati Rayudu to bring up his third consecutive fifty-plus score of the ongoing ODI series.

Overall, Kohli is the 3rd to achieve this feat at No.3 after Ponting and Sangakkara. A total of seven players scored over 8000 runs while opening the innings in the ODI format. If the numbers scored at No.1 (first-strike) and No.2 (second-strike) are considered only Sachin Tendulkar ended up with 8000 ODI runs at a position other than No.3. The master blaster scored over 13000 ODI runs while taking the second strike. Sachin got to 8000 ODI runs at No.2 alone in only 162 innings; eight more than Kohli.

Quickest to 8000 runs at any position in ODI cricket: 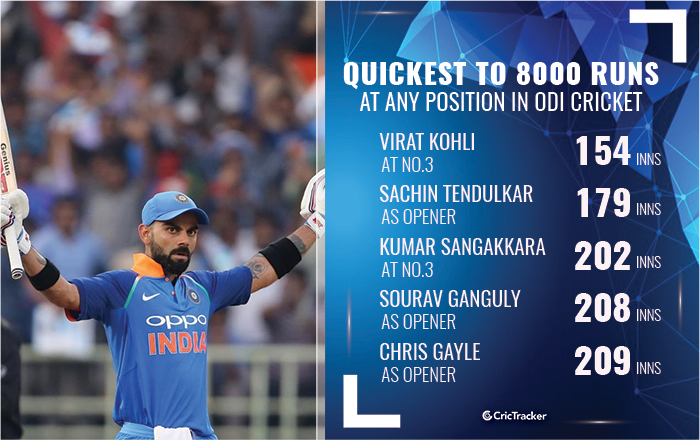