Stats: Youngest players to take a hat-trick in Test cricket

Stats: Youngest players to take a hat-trick in Test cricket

Naseem Shah took a hat-trick against Bangladesh in the Rawalpindi Test.

Naseem Shah is slowly turning to be a crucial player in Pakistan’s Test line-up at a very young age as he came up with a brilliant bowling effort in the ongoing Test against Bangladesh. A week before his 17th birthday, the young pacer claimed a hat-trick to break the back of the visiting team.

In the last half hour of the 2nd Day’s play, Naseem claimed the wickets of Najmul Hossain Shanto, Taijul Islam and Mahmudullah in successive deliveries to shift the momentum in Pakistan’s favour.

Bangladesh were 88 runs behind in their 2nd innings with 8 wickets in hand before the hat-trick. His efforts with the ball have put Pakistan on the top as they look for their maiden Test victory in Rawalpindi since 1997. In his previous Test match which was against Sri Lanka in Karachi, Naseem Shah became the 2nd youngest player and the youngest pacer to take a 5-wicket haul in Test cricket. The hat-trick on Sunday now makes him the youngest player with this feat in the longer format.

The previous youngest player with a Test hat-trick was Alok Kapali who was 19 years and 240 days old at the time of his hat-trick against Pakistan in the 2003 Peshawar Test. The Bangladesh bowler then broke the record of Abdul Razzaq who was the youngest to take Test hat-trick in the 2000 Galle Test against the Lankans when he was 20 years and 202 days. Naseem was only 16 years and 359 days old on Sunday and is also the 3rd youngest known cricketer to take a first-class hat-trick. 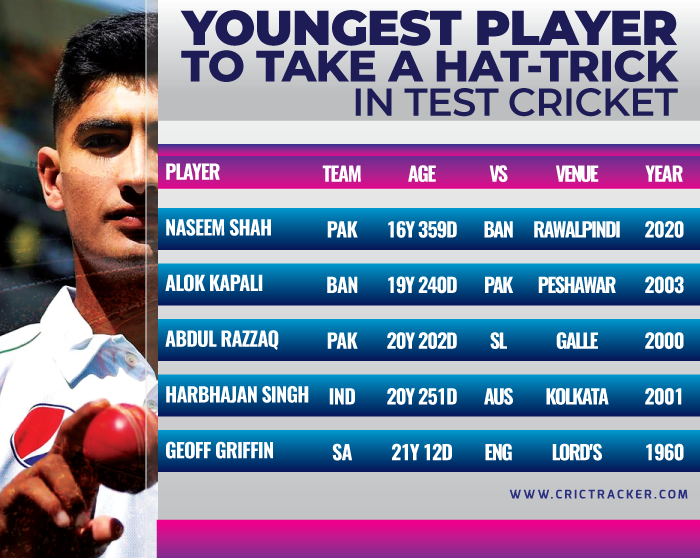 Naseem Shah’s hat-trick is only the 5th in Test cricket for Pakistan with the first two recorded by Wasim Akram. The left-arm pacer took hat-tricks against Sri Lanka in the space of Test days during the 1999 Asian Test Championship.

He took a hat-trick in Lahore which was league stage match and followed it with a hat-trick in the final hosted by Dhaka. Abdul Razzaq and Mohammad Sami are the other players with Test hat-tricks for Pakistan which were also recorded against Sri Lanka.

Naseem’s hat-trick was the first in nearly 18 years to take a Test hat-trick for Pakistan as Mohammad Sami, during the 2002 Lahore Test, was the last player with this feat. Pakistan had four Test hat-tricks between 1999 and 2002 but none in the following 17 years.

However, in this period, two visiting players did pick hat-tricks in Pakistan – Alok Kapali for Bangladesh in 2003 Peshawar Test and Irfan Pathan in the 2006 Karachi Test; both ended on the losing side. 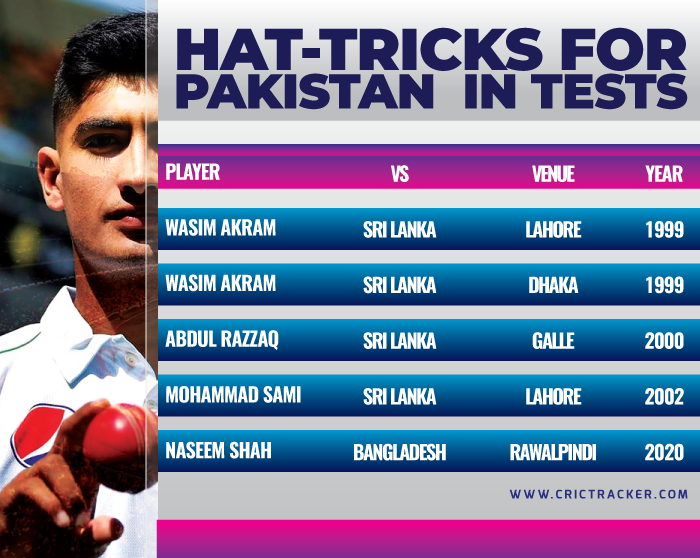