In a short span, Chahal has turned out to be key in improving India’s win-loss record in the shortest format.

Yuzvendra Chahal has turned out to be a rather lethal weapon for the Indian team in the limited-overs formats ever since his debut in 2016. The leg-spinner has been a reliable wicket-taking option who can delivery whenever his captain requires his services. Chahal made his spot permanent in the T20I team ever since the start of 2017 and was drafted into ODI team post the Champions Trophy last year. In this short span, Chahal has turned out to be key in improving India’s win-loss record in the shortest format.

His success with the Royal Challengers Bangalore handed him Indian debut during the 2016 tour of Zimbabwe. Chahal fine-tuned his bowling at the M. Chinnaswamy Stadium which is famous for its short boundary. The leggie got used to concede boundaries and the wickets that come in the way as well. The experience in IPL made him even tougher bowler coming into the International stage. Chahal came into limelight with his 6-wicket haul against England in the T20I series decider.

Most wickets since Chahal’s debut

Chahal bagged 41 wickets in the 23 T20I matches he played thus far at an average of 17.19. Of those, 35 wickets came alone in the 17 T20Is that India won at an impressive average of 13.54. However, he took only six wickets in the six matches that India lost when Chahal was in the playing XI. Chahal averaged 38.5 and conceded at an economy rate of 9.82 in those lost matches. He recorded the worst figures by an Indian by conceding 64 runs in his four overs a year after recording the best figures by an Indian. The 41 wickets Chahal picked in his T20I career are the most by any bowler in this format since his debut. In the span, Chahal took three more wickets than Rashid Khan playing four games more. Since the start of 2017, the Indian wrist spinner accounted for 38 wickets in 20 matches, six more than the 2nd best Rashid. Pakistan’s young leg-spinner Shadab Khan stands at No.3 in both the lists which shows the dominance of the wrist spinners in the recent past. 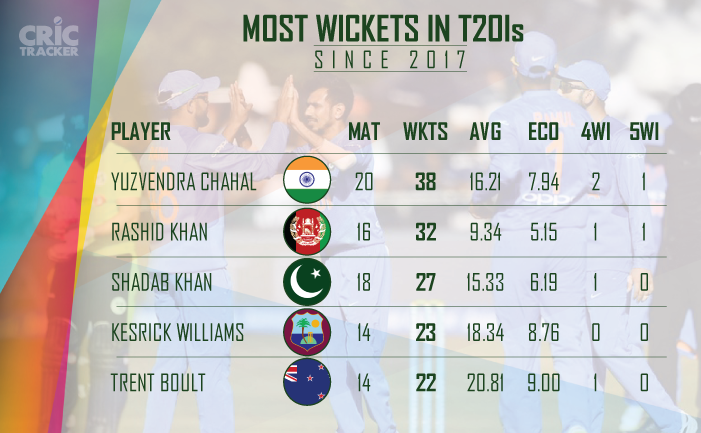