Australia will play a Test match without Steven Smith in the playing XI for the first time since 2013.

The 4-match Test series between South Africa and Australia continued to be surrounded by controversies as it was the turn of the ball tampering in the 3rd Test in Cape Town. The Australian opener Cameron Bancroft was caught rubbing the ball with a yellow colour substance to change the shape of the ball. The on-field cameras caught Bancroft hiding the yellow substance inside his trousers after informed by the support staff. The Australian captain Steven Smith and Bancroft admitted their mistake in the press conference after the day’s play.

Smith said that it was the decision of their leadership group for bringing changes to the ball for extracting the reverse swing. Both the players admitted guilt to the match referee who sanctioned one-Test ban for the Australian skipper and three demerit points to Bancroft. This means the Aussies will be missing the services of their best batsman in the final Test match in Johannesburg. They were set a target of 440 in the 3rd match of the Test series that is level at 1-1.

The Johannesburg Test will be the first in the last 60 Test matches Australia played without Steven Smith in their playing XI. The last time he didn’t feature in Australia’s Test playing XI was in the 2013 Hyderabad Test against India. Since then, Smith featured in all the 59 Tests played by the Aussies as he didn’t give a chance to the team management to drop him. Smith’s 59 consecutive Tests for Australia is the 2nd longest active streak for any player.

Alastair Cook, currently featuring in the Auckland Test match, is playing his 151st consecutive Test match for England. Only Allan Border (153) featured in more consecutive Test matches of his team than Cook. Excluding Cook and Smith, only four other players have an active streak of 50+ consecutive appearances for their country. Australia’s Nathan Lyon and David Warner have represented their team in 55 consecutive Tests till date beginning from the Manchester Test in the 2013 Ashes series.

Players with most consecutive Test matches for a team: (Active streaks) 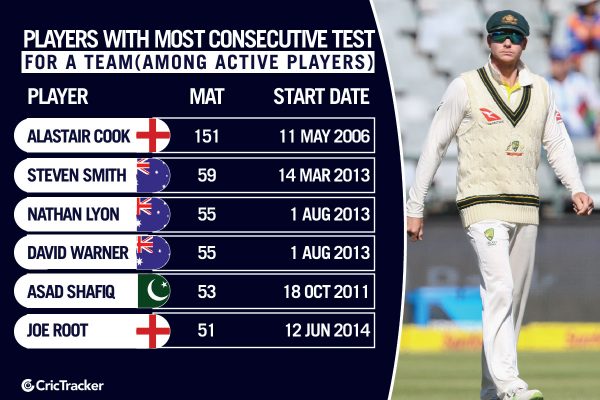