Otago Volts could well bag their 3rd win of the season and hand Central Stags their third straight defeat.

Both Otago Volts and Central Stags began the campaign in a similar fashion with the Volts losing their one after two wins while the Stags losing twice in two matches after a win over the defending champions. The Volts would consider themselves lucky having pulled off a 1-run win from no way against Wellington in the second match of the tournament. The Otago side brought in all-rounder Ben Raine and Brad Wilson for this game in the place of Neil Broom and Christi Viljoen who were crucial in both their victories.

The Central Stags also made one change with Felix Murray making way for Ajaz Patel, who was a part of the New Zealand Test squad till last week. The Stags also excluded Christian Leopard from the squad to reduce it to a 12-man side. The Stags will be happy with their recent record against the Otago as they defeated them on four occasions in their previous five meetings and lost another game by a one-run margin.

The 11th match of the Super Smash T20 2018-19 will be played between Otago Volts and Central Stags at the University Oval in Dunedin.

There will be no official broadcast for this match. The 12th game of Super Smash will be telecasted live.

Dunedin is a perfect track for the chasing sides as five of the previous seven completed Twenty20s were won by the teams batting second. The two losses for the chasing teams since 2015 includes a 2-run defeat. The first game of the season to be played here witnessed the Otago side chase down 185 comfortably against Canterbury Kings.

Matthew Bacon can be the X-factor for the Volts as his pace can be utilized cleverly. He claimed nine wickets from four games in the previous season including two four-wicket hauls. However, he went wicketless in his three overs for 22 runs in his first game of the season after being on the bench for two matches.

The all-rounders George Worker and Anaru Kitchen must be given a preference for the multipliers. Among batsmen, Hamish Rutherford and Tom Bruce hold the key for their respective teams and are ideal for the multipliers. One of Seth Rance and Jacob Duffy can be your vice-captain. 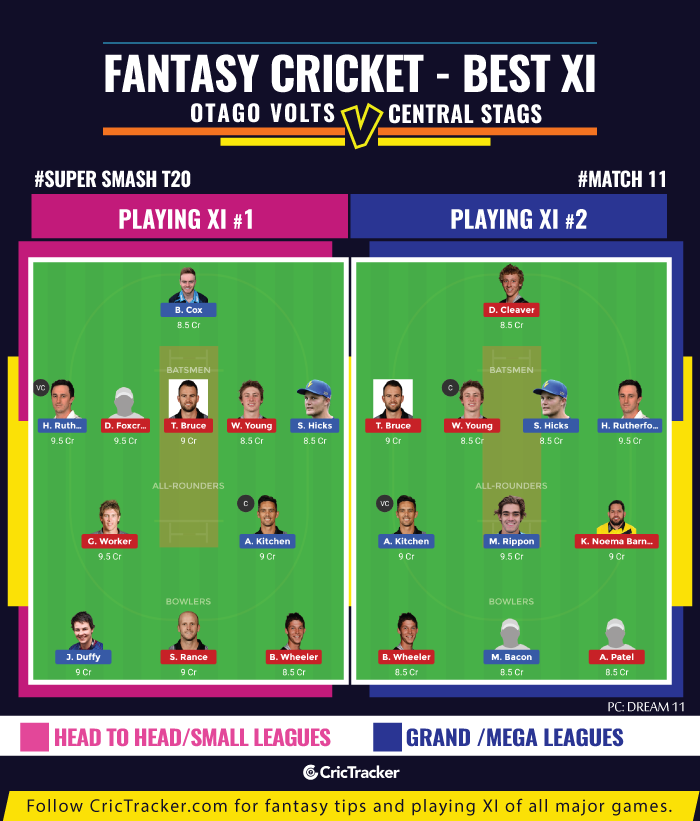 The likes of Ajaz Patel and Ben Raine have good chances of featuring in the playing XI. Patel can be picked based on his recent form and Raine as well based on his capability as an all-rounder.

Otago Volts could well bag their 3rd win of the season and hand Central Stags their third straight defeat.