Auckland Aces will start as favourites against the Otago Volts despite missing some big names.

The Auckland Aces couldn’t make most of the availability of the International stars as two of the four matches where they featured in the squad turned out to be washouts. Aces were defeated twice during the absence of the national team players. Auckland will once again be handicapped with India’s tour of New Zealand that gets underway on 23rd January.

They will be up against the Otago Volts in their 7th match and both the teams have the same number of points in as many matches. The last week’s match between the two sides turned out to be a washout after the Aces made 117/1 in only ten overs with the help of a quick-fire fifty from Martin Guptill. Both the teams have made a couple of changes to their squad for this crucial game that will determine the top three on the points table.

The 21st match of the Super Smash T20 2018-19 will be played between Auckland Aces and Otago Volts at the Eden Park Outer Oval in Auckland.

The Eden Park Outer Oval has recently produced low scoring games as the average first innings score in the last four matches here reads only 139. In the three matches before this, the team batting first produced 190+ totals.

The Otago all-rounder Ben Raine had a brilliant season during the T20 Blast last year. Playing for Leicestershire, Raine scored 332 runs from 13 games including a century. He also picked up 10 wickets during the tournament. Raine will be crucial for Otago’s further chances in the tournament.

Anaru Kitchen and Glenn Phillips will be perfect for the captain and vice-captain’s roles. The likes of Donovan Grobbelaar, Hamish Rutherford and Ben Raine can be considered as alternatives. 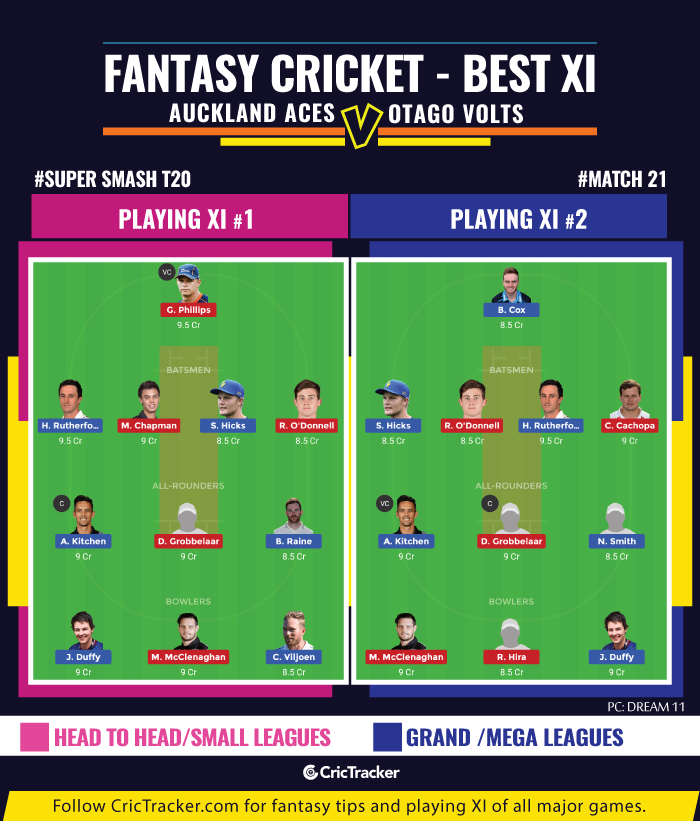 The Auckland Aces’ bowlers Ronnie Hira, Mitchell McClenaghan, William Somerville and Matthew Quinn have cracked the code of picking wickets. However, it will be tough to pick from among them as it is really difficult to predict which bowler will deliver on a given day. McClenaghan has to be the first choice among the four given his consistency in the tournament.

Auckland Aces will start as favourites against the Otago Volts despite missing some big names.