Pick the all-rounders in your fantasy team wisely.

Gujarat is going well in the Syed Mushtaq Ali T20 tournament with three wins from the three matches they played thus far. They sneaked in a 13-run win against Meghalaya and registered a huge 70-run victory over Himachal Pradesh. The game against Rajasthan witnessed comedy of errors from both the teams. The game ended in a Tie with Gujarat failing to score five runs from the last eight balls.

In the Super Over, Gujarat scored only four runs but later conceded only four runs to win the game by virtue of hitting more boundaries. They will be now up against the Tamil Nadu team on Monday in their 4th game. The Ravichandran Ashwin-led team suffered a 53-run defeat to Rajasthan but bounced back with a 6-wicket win against Bihar on Sunday.

The Syed Mushtaq Ali T20 Trophy 2018-19 match between Gujarat and Tamil Nadu at the Lalabhai Contractor Stadium in Surat.

List of broadcasted matches from the tournament on Day 4:

Delhi vs Kerala and Andhra vs Jammu & Kashmir

Gujarat vs Tamil Nadu and Himachal Pradesh vs Bihar

The Lalabhai Stadium hasn’t witnessed big totals but all the game played here so far were tightly contested. A game with 150+ totals is expected when Gujarat and Tamil Nadu face off.

Parthiv Patel hasn’t featured in any game this season due to his father’s health.

Gujarat’s Piyush Chawla and Axar Patel will be crucial picks from this game. Chawla picked up five wickets across three matches and scored 44 runs. Axar, on the other hand, aggregated 103 runs and picked up one wicket. 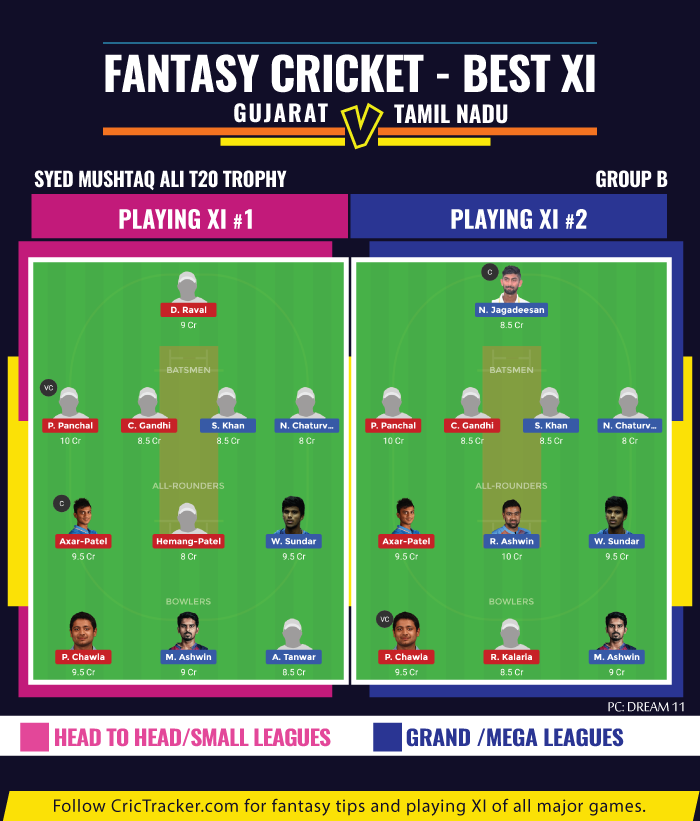 Ravichandran Ashwin can be considered as the weakest link among the all-rounders. The all-rounders’ category is already filled with Axar, Sundar and Hemang Patel who are consistent with both bat and ball.

Gujarat is expected to continue their winning streak by defeating Tamil Nadu.