Murali Vijay will be opening the innings for Tamil Nadu in this game.

Tamil Nadu has been boosted by the late inclusion of Murali Vijay and Srikkanth Anirudha to a team already containing specialists of the T20 format who are exports of the Tamil Nadu Premier League (TNPL). They began the tournament with a 53-run defeat against Rajasthan before defeating Bihar by six wickets. They clinched a dramatic thriller against Gujarat in the last game by one run while defending 125.

Gujarat put themselves in the game with a 28-run stand for the 10th wicket which came to an end on the final delivery. On the other hand, Himachal Pradesh has been inconsistent throughout the tournament. They lost to Vidarbha in a last-ball thriller before defeating Meghalaya by a 65-run margin. They later lost to Gujarat by a huge 70-run margin and comfortably defeated Bihar in the previous match.

The Syed Mushtaq Ali T20 Trophy 2018-19 match between Tamil Nadu and Himachal Pradesh will be played at the CB Patel International Cricket Stadium in Surat.

The new stadium in Surat has been quite uncertain so far. The first two games produced 180+ totals while the previous two witnessed scores under 140. Vidarbha bundled out Rajasthan to 73 while defending their total of 117.

Washington Sundar has shown his all-rounder capability as he scored 74 runs across the three matches including two 30+ scores. He starred with the ball taking three wickets by conceding runs at a low economy. Sundar could well be the MVP in the game between TN and Himachal. 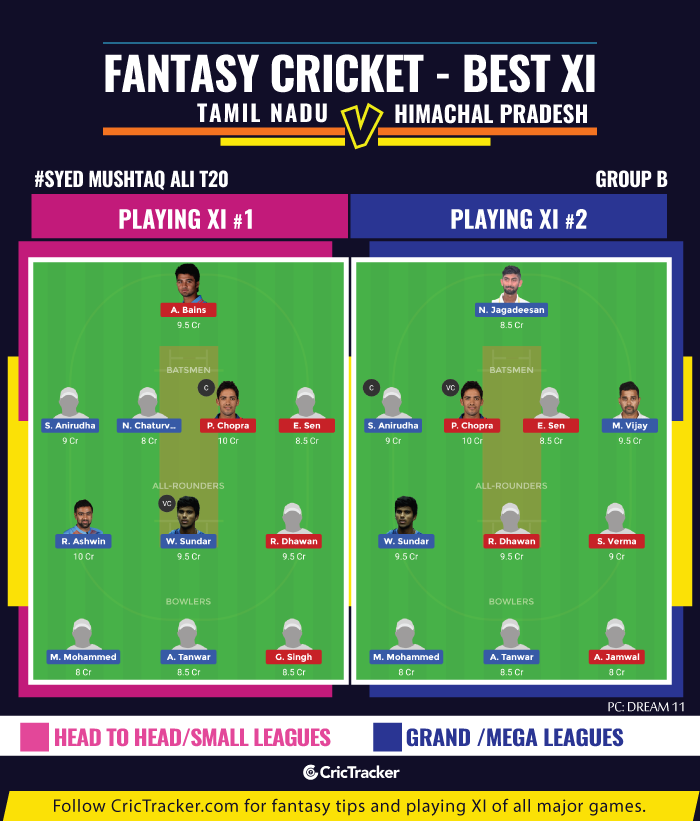 Tamil Nadu will be in a confusion with regards to their batting line-up with as many as five players who played last match are capable of opening. Murali Vijay, Hari Nishanth, NS Chaturved, N Jagadeesan and Srikkanth Anirudha all have successful stints of the opening in T20s or in the TNPL.