T20 Blast 2022: GLA vs HAM Match Prediction – Who will win today’s match between Glamorgan and Hampshire?

T20 Blast 2022: GLA vs HAM Match Prediction – Who will win today’s match between Glamorgan and Hampshire?

Both the teams haven't had a decent run so far.

Glamorgan will take on Hampshire in the 67th match of the T20 Blast 2022 at Sophia Gardens in Cardiff. It has not been an easy outing for the two teams as both are stranded in the bottom half of the South Group points table. While Glamorgan is placed seventh, Hampshire is just one place below at the eighth spot.

The hosts Glamorgan have won two of their seven fixtures so far, losing four games and one game being abandoned due to rain. On the other hand, the visitors have contested six games, losing four and winning just two matches. Glamorgan has lost the last two games that they played, whereas Hampshire has won their previous two games, and will be competing against Essex on June 9 before meeting Glamorgan on June 10.

The pitch at the Sophia Gardens in Cardiff has hosted three games so far in the tournament, of which the hosts have won just one, as the second fixture was abandoned due to rain and they lost the third one. While two games witnessed decent totals, one was a low-scoring game. The pitch conditions might be difficult to bat early on, and thus the captain winning the toss would look to bowl first.

Ben McDermott, the wicketkeeper batter of Hampshire, has been in terrific form throughout the season this year. With a total of 239 runs in six games, he is the leading run-scorer for his side. Batting at a strike rate of 170.71, McDermott has emerged as one of the finest batters on the team and thus he would look to continue his momentum against Glamorgan as well.

Michael Hogan is the leading wicket-taker for Glamorgan, even though the team has not been performing that well this season. With a total of 14 wickets from seven games, Hogan tops the charts. His five-wicket haul against Surrey has been his standout performance so far in the game, and he would look to repeat the heroics against Hampshire. 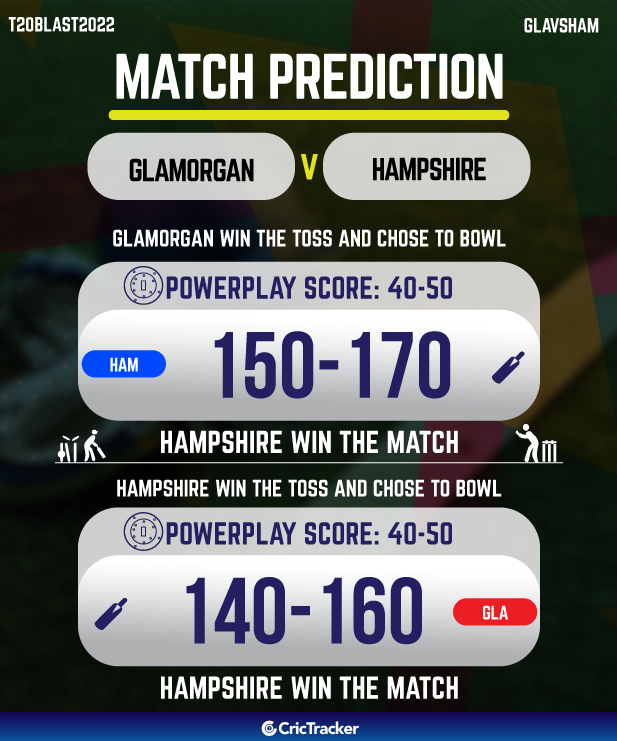