T20 Blast 2022: MID vs SUR Match Prediction – Who will win today’s match between Middlesex and Surrey?

T20 Blast 2022: MID vs SUR Match Prediction – Who will win today’s match between Middlesex and Surrey?

Middlesex will take on Surrey in their next encounter of the T20 Blast 2022 South Group fixture at Lords in London. Middlesex have been on and off this season with three wins in six games and are placed at the sixth position in the points table with six points. They are coming off a big loss in their previous game against Hampshire where they were hammered by the opposition and will need to pull up their socks soon.

On the other hand, Surrey have enjoyed their run so far in the tournament this year and are at the top of the points table with four wins in five games. They are yet to be defeated and their previous game against Glamorgan was washed out early in the second innings. However, they are playing Sussex before this game. Nevertheless, they will be looking to continue their winning momentum against Middlesex as well.

The Lord’s pitch hosted a Test match between England and New Zealand recently, and there was a lot for the bowlers on the first two days. However, on the last two days it seemed to have flattened and hence a high-scoring encounter can be expected in the upcoming fixture. The captain that wins the toss will be looking to bowl first on the pitch.

Jason Roy has got quickfire starts in the last two games but hasn’t managed to turn it into a match-defining innings which he has been used to in the past. The right-hander has the ability to be quite destructive in the powerplay and his form will be crucial for the Surrey side going forward in the tournament.

Sam Curran has been consistent in the wickets column for Surrey this season and the left-arm seamer has a fifer already in the tournament this year. He has been batting higher up the order at number three and has made some important contributions as well. He did not bowl in the game against Kent and Surrey will expect him to continue with his good form with the ball. 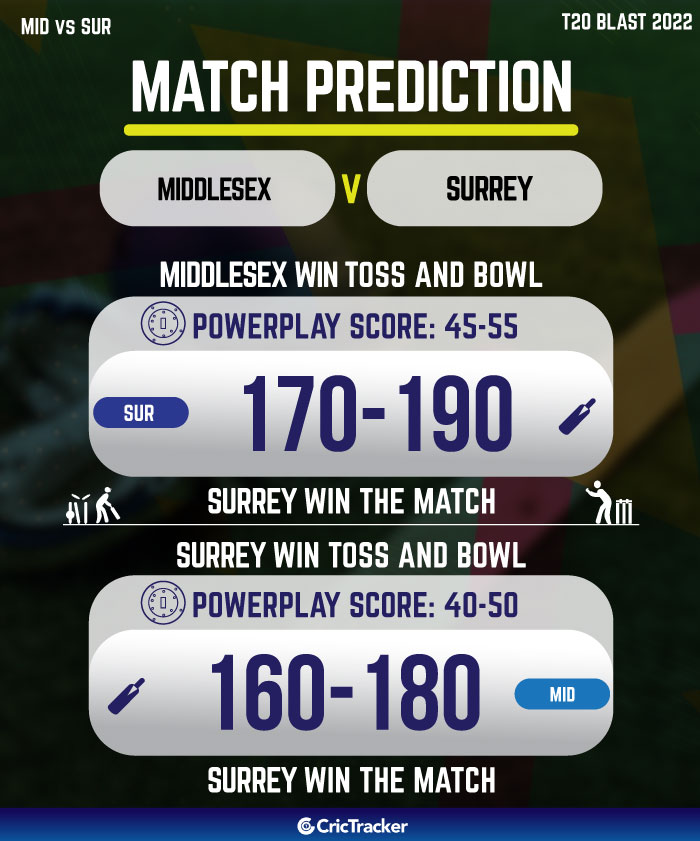