T20 Blast 2022: YOR vs LAN Match Prediction – Who will win today’s match between Yorkshire and Lancashire?

Lancashire will be buoyed by the return of Matt Parkinson and Richard Gleeson to the team for the semi-final clash.

Yorkshire will square off against Lancashire in the first semi-final of T20 Blast 2022 at Edgbaston on Saturday, 16th July. The winner of this encounter will meet the victors of the second semi-final in the final later in the day at the same venue.

Yorkshire made it to the semi-finals after a nail-biting win against Surrey in the quarter-final as Jordan Thompson defended five runs in the final over of the match by conceding just three runs and picking two wickets to hand his team an incredible one-run victory. But it’s going to be a stiff mountain to climb in the semis as they will be without their talismanic skipper David Willey, who is currently taking part in the England-India ODI series.

Meanwhile, Lancashire will be buoyed by the availability of Philip Salt, who was released by the English team ahead of the third and final ODI against India. The Roses completed a routine victory against Essex in the quarter-final and will be looking to emulate the same against Yorkshire on Saturday. Having been released by England Matt Parkinson will also join the side ahead of the semis. Richard Gleeson will also be part of it.

The surface at Edgbaston assists the swing bowlers early on, but as the game progresses, batting becomes much easier, and the slower bowlers come into effect. Teams winning the toss will like to bowl first to make full use of the early movements and restrict the opponents to a mediocre total.

Lancashire’s veteran skipper Dane Vilas has been in scintillating form in the last few games and his explosive innings of 51 off just 23 deliveries in the quarter-final against Essex made a tricky chase a walk in the park for the Roses. The 37-year-old South African will hope to replicate his heroics from the previous match and guide his side to the final of the tournament.

The second highest wicket-taker in this year’s tournament, Richard Gleeson has been sensational for the team and made his mark in international cricket as well by picking up a three-fer on his T20I debut for England against India in the second T20I of the series. The 34-year-old will bring all his experience from that T20I series and will be eyeing Naveen-ul-Haq’s tally of 24 wickets this term. 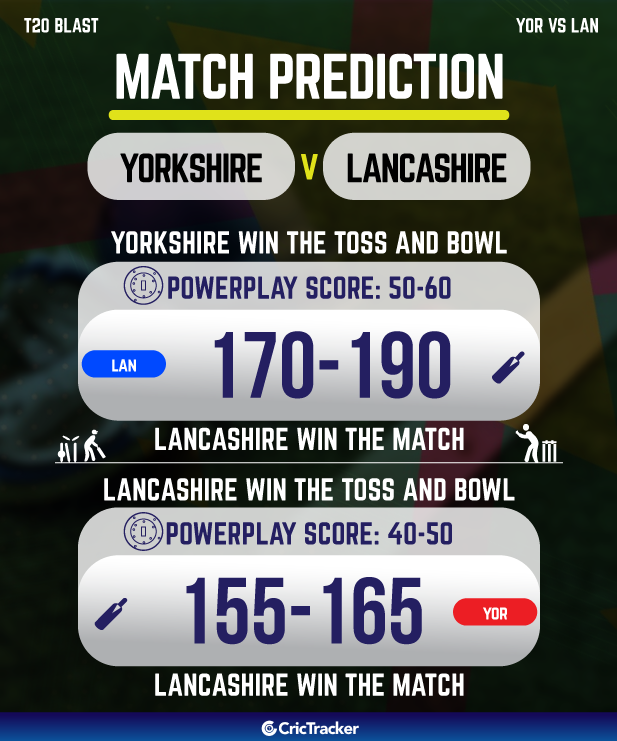