The Strikers have lost their last two games and will be desperate to get back to winning ways.

NaMo Bandra Blasters will be eyeing third win on the spin when they take on struggling Eagle Thane Strikers. Blasters are on a fine run after losing their opening two games and have won their last two matches. With two wins from four games, the Blasters are sixth in the points table. On the other hand, the Strikers are at the seventh spot after managing a solitary win from their first four games. The Strikers have lost their last two games and will be desperate to get back to winning ways to keep alive their hopes of progressing ahead of the league stage.

In their last outing, the Blasters thrashed table-toppers SoBo SuperSonics. It was a clinical performance from the Shreyas Iyer led side. A fine bowling effort helped the Blasters restrict the SuperSonics to 151 for 8. Nikhil Date starred with the ball, picking up three wickets while Aditya Dhumal and Sujit Nayak picked up two wickets each. Opener Eknath Kerkar then scored a fine fifty and was well supported by the likes of Iyer and Prasad Pawar as Blasters chased down the total with four wickets in hand and four balls remaining.

The Strikers, on the hand, lost their last outing which was against ARCS Andheri. Fifties from skipper Kevin Almeida and Iqbal Abdulla helped Andheri score a competitive 154 for 8. In reply, the Strikers ended up on 142 for 8 despite Alpesh Ramjani scoring a fifty and skipper Aditya Tare scoring 48.

The way the Wankhede Pitch has churned out games in this tournament, it is tough to find a particular trend. However, batting second still looks the safer bet. While batting first, a score above 160 is looking defendable.

The temperature will be around 32-degree Celsius when the game is underway at the Wankhede Stadium. There is also no prediction of rain. The humidity will be hovering between 70-80% during the game.

Having won their last two matches, the Blasters are more than likely to stick with the same playing eleven. The Strikers, however, can change their combination in a desperate attempt to win their last league game. Sarfaraz Khan looks likely to play the must-win game at the expense of Sagar Mishra. Barring this, the Tigers are unlikely to make any change to the team that lost the last game.

The Prediction is for Eagle Thane Strikers to win the match. 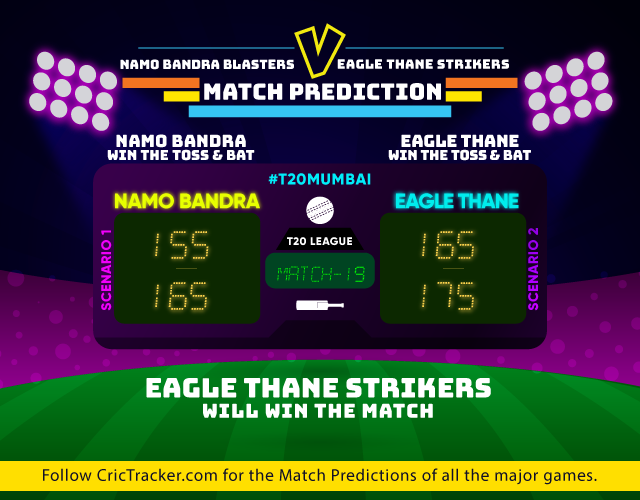