Eagle Thane Strikers will make their entry into the T20 Mumbai League when they take on the North Mumbai Panthers in the afternoon game on Wednesday. The Thane Strikers, led by Aditya Tare, have the likes of Shardul Thakur and Sarfaraz Khan on their side. This tournament will be a crucial one for Sarfaraz Khan who is seeking a return to Mumbai after moving to Uttar Pradesh in 2016-17.

The youngster returned to Mumbai in 2018 but at the cost of missing out on domestic season due to cooling off period. Sarfaraz made a mark with the Kings XI Punjab in the IPL with a couple of good knocks. On the other hand, the North Mumbai Panthers were one of the two teams that failed to make it to the final four last season. The Panthers managed to win only one of the five matches they played in the first edition.

The 3rd match of the T20 Mumbai League 2019 will be played between Eagle Thane Strikers and North Mumbai Panthers at the Wankhede Stadium in Mumbai.

The opening game saw the side batting first struggle to get going. This was mostly due to the Triumph Knights trying to punch over the par score. The chasing team looked comfortable making the track look like a perfect one for 170+ totals.

Pravin Tambe has kept proving age is just a number as he excelled in the T10 League held last year where he bagged eight wickets in four games. He picked up a hat-trick in his debut game and finished with figures of 5/15. Tambe claimed eight wickets in the previous edition of the T20 Mumbai League.

Prithvi Shaw will be hoping to make most of this tournament after ordinary outings in the IPL. Sarfaraz Khan is eager to make a mark on his Mumbai return. The two youngsters will be ideal for multiplier roles. Shardul Thakur’s all-round skills can be handy and will be a worthy vice-captain option. Aditya Tare will be too good to be left out if he bats in top three. 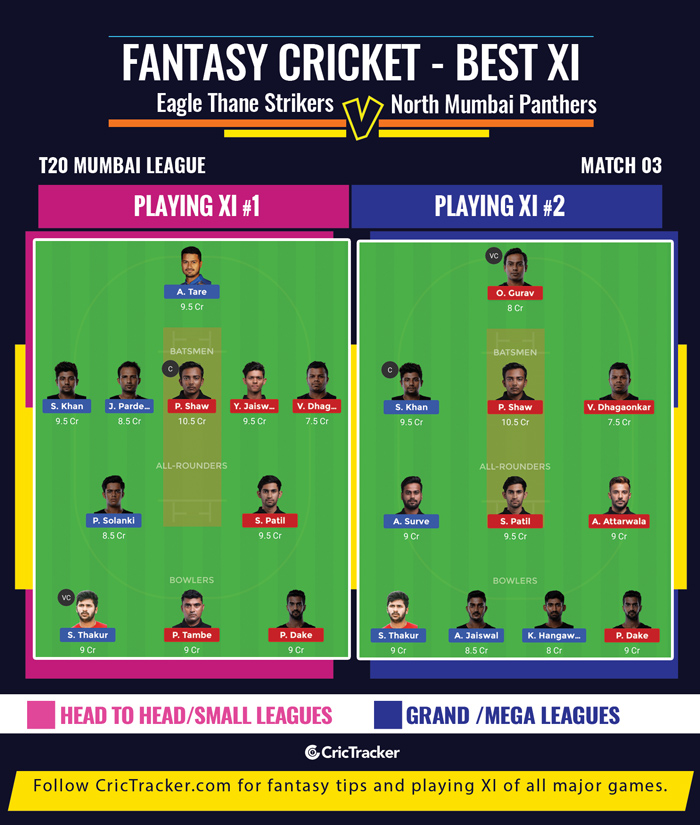 With the likes of Prthivi Shaw and Sarfaraz Khan occupying high credits, only one of the top three costliest all-rounders can be picked as Shardul and Tambe already cost nine credits each.

Eagle Thane Strikers are expected to make their debut in T20 Mumbai with a victory.