Paul Stirling is in the form of his life, especially in the T20I format.

Ireland and Netherlands are set to lock horns in Match No.3 of the T20 World Cup Qualifiers on Monday, October 18 at the Sheikh Zayed Stadium in Abu Dhabi. The Netherlands, led by Pieter Seelaar, started the warm-up matches with a hefty 31-run defeat at the hands of Scotland.

However, they made a comeback by beating Oman in their second practice match on October 14. Ireland, on the other hand, will be going in to the game after back-to-back wins in the warm-ups. They began with a crushing eight-wicket win over PNG after which they beat Bangladesh.

The pitch in Abu Dhabi hasn’t produced a lot of high-scoring games, at least in international cricket. But over the years, the track has helped the chasing teams to a large extent. Batting second should be the way forward.

Paul Stirling has been stupendous for Ireland over the years. His recent form in the shortest format is also worth envying. He had an incredible run in the T20I series against Zimbabwe where he even scored a century. If he gets going in the first six overs, the Netherlands bowlers may end up chasing leather on Monday’s encounter.

Mark Adair has been a genuine wicket-taker for Ireland in the T20I format. He is someone, who can bowl in the powerplay and at the death. The pacer manages to hit the right channels and induces false shots from the batters. Adair was also amongst the wickets when Ireland locked horns with South Africa. He is expected to play a key role. 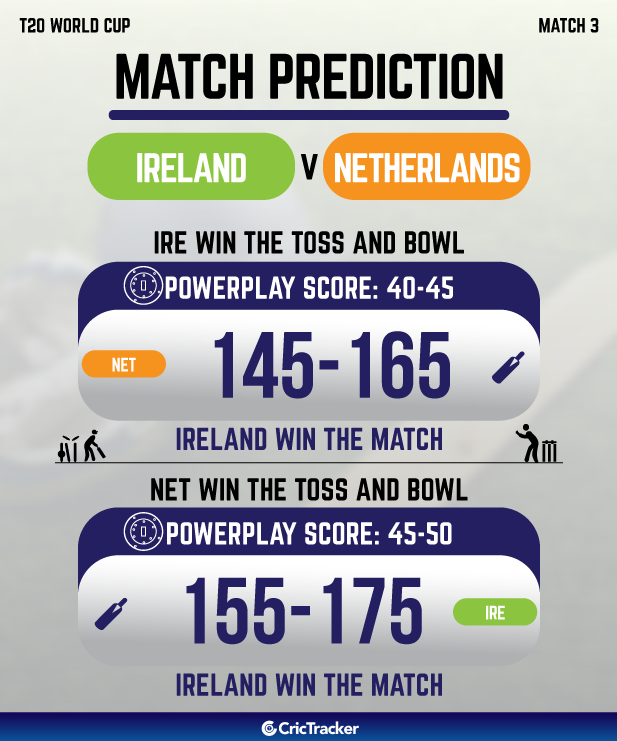