The winner of the match will progress to the Super 12s along with Sri Lanka.

Namibia and Ireland are set to lock horns in Match No.11 of the T20 World Cup Qualifiers on Friday, October 22 at the Sharjah Cricket Stadium in Sharjah. Ireland, led by Andrew Balbirnie, started their campaign on a resounding note, beating Netherlands by seven wickets after Curtis Campher’s hat-trick.

However, they lost to Sri Lanka by 70 runs on Wednesday. Namibia, on the other hand, made a strong comeback as they defeated Netherlands by six wickets. The upcoming game is a knockout. The team, who wins the game, goes through to the Super 12 along with Dasun Shanaka’s Sri Lanka.

The pitch in Sharjah hasn’t been a high-scoring one of late. During the IPL 2021, scores of 130 weren’t cakewalks for oppositions. But chasing was easier compared to batting first. The slower bowlers are likely to come into play.

Paul Stirling is someone, who has loads of experience under his belt, having plied his trade for more than a decade. The right-hander prefers to take on the opposition bowling from the word go. In the first game against Netherlands, he smashed an unbeaten 30. But against the Lankans, he faltered to some extent. He will look to make an impact.

David Wiese is one of the veterans in the Namibia team. Having plied his trade around the world, he has plenty of experience. In the first two matches, he couldn’t quite make the impact he was expected to. In the second game against Netherlands, he picked up one wicket. Wiese will want to make a greater impact with the ball against Ireland. 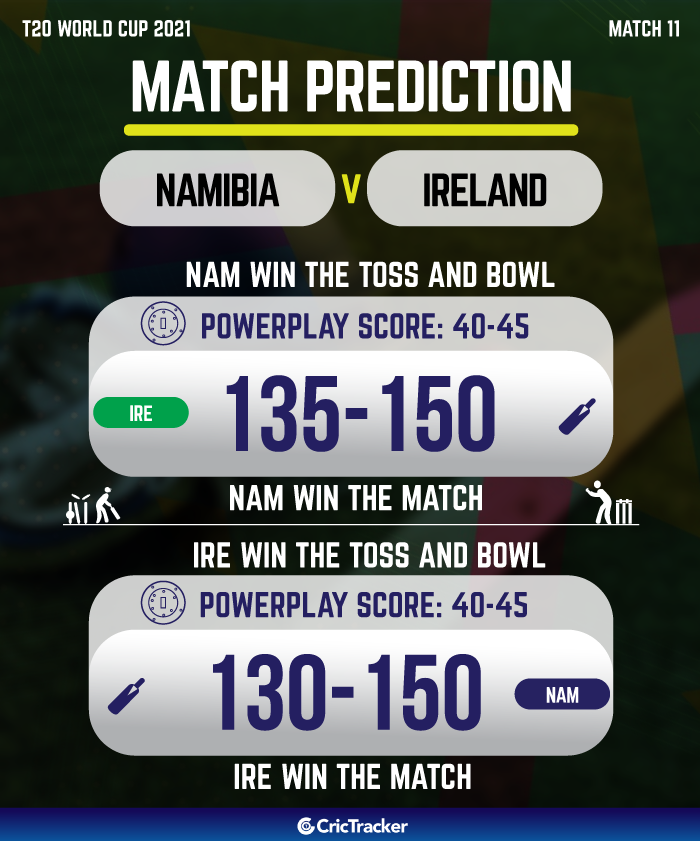