Pakistan will be going into the game with a lot of confidence after beating India by 10 wickets on Sunday.

Pakistan and New Zealand are set to cross swords in Match No.19 of the T20 World Cup on Tuesday, October 26 at the Sharjah Cricket Stadium in Sharjah. Pakistan, led by Babar Azam, started their campaign in the best possible way after they defeated Virat Kohli’s India by 10 wickets on Sunday.

Babar, Mohammad Rizwan and Shaheen Afridi starred as the Men in Green registered their maiden World Cup win over the Men in Blue. The Black Caps, on the other hand, have looked a tad jittery of late. Kane Williamson and his men lost to Australia and England in the warm-ups a few days ago.

The pitch in Sharjah has generally been slow and low. But the game between Bangladesh and Sri Lanka turned out to be a high-scoring affair. The track, however, has continued to favour the team, batting second.

Mohammad Rizwan is currently going through a purple patch in international cricket. The right-hander has scored 831 runs in 15 T20I innings in 2021 at an incredible average of 103.87 and a strike rate of 140.37. Albeit he has scored two ducks this year, he has made up for it with one century and as many as eight half-centuries. The Kiwis need to get him out early.

Lockie Ferguson was excellent when he played for the Kolkata Knight Riders in the 2021 Indian Premier League. In Sharjah he bowled fiery spells and picked wickets at regular intervals. Prior to the World Cup, he played one warm-up match against England and returned with figures of 3-0-19-1. If he finds his rhythm, Pakistan batters could find themselves in trouble. 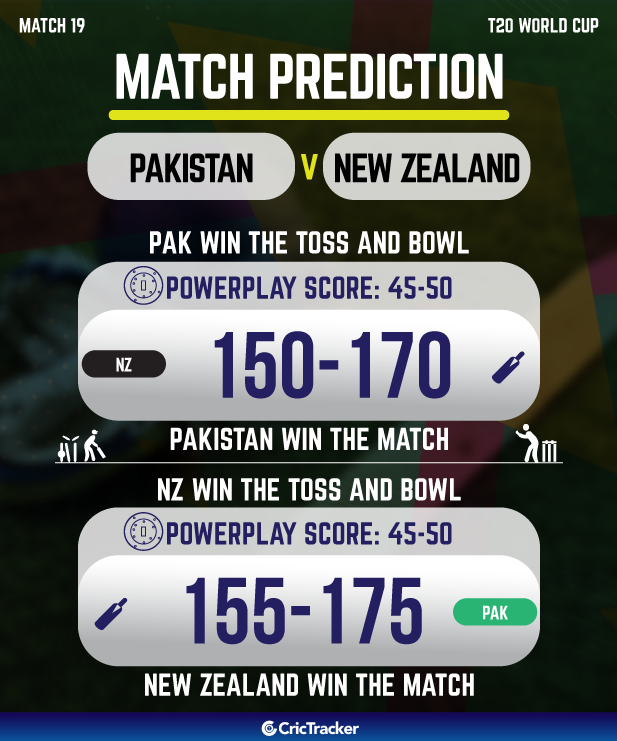