Both teams are yet to open their account in the tournament.

Bangladesh and West Indies are set to cross swords in Match No.23 of the T20 World Cup on Friday, October 29 at the Sharjah Cricket Stadium in Sharjah. The Caribbean team, led by Kieron Pollard, have had a disastrous campaign thus far, having lost both their games against England and South Africa.

Their net run rate of -2.550 is the worst among the six teams in Group B. The Tigers are also yet to open their account after back-to-back losses at the hands of England and Sri Lanka. On Wednesday, October 27, England beat them by eight wickets. They also have a rather poor net run rate of -1.655.

The pitch in Sharjah hasn’t been an overly great one for batting. The spinners have extracted quite a bit from the surface. Batting second should remain the way forward.

Evin Lewis has been excellent for the West Indies in the T20 tournament. The left-hander couldn’t get going in their game against England, but he showed his class against South Africa. The southpaw smashed 56 runs off 35 balls with the help of three fours and six sixes. He will be looking to replicate something similar against the Tigers as well.

Shakib Al Hasan has been the standout bowler for Bangladesh in the ongoing edition of the T20 World Cup. The left-arm pacer scored runs and picked up wickets for fun in the Qualifiers. The Magura-born also picked up two wickets against Sri Lanka. Albeit he failed to deliver against England, he is expected to make a comeback against the West Indies. 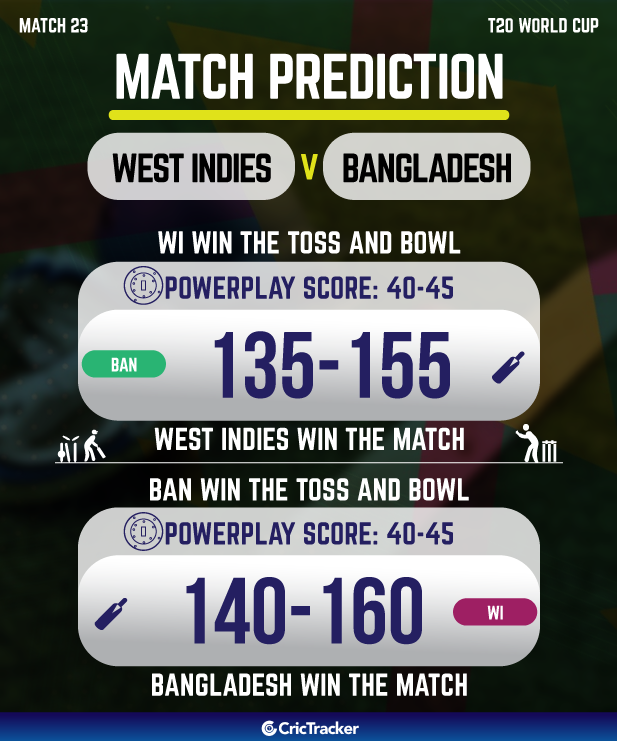