While the Aussies are in with a great chance of qualifying for the semis, defending champions West Indies are already out of the competition.

Australia and West Indies are set to cross swords in Match No.38 of the ongoing T20 World Cup 2021 on Saturday, November 6 at the Sheikh Zayed Stadium in Abu Dhabi.  The Caribbean team, led by Kieron Pollard, has already been knocked out of the competition after their 20-run loss to Sri Lanka on Wednesday.

Kieron Pollard and Co. will be playing for nothing, but pride in the final Super 12 match. The Aaron Finch-led Aussies, on the other hand, must be brimming with confidence after they defeated Bangladesh by eight wickets on Wednesday. A win will almost help them qualify for the semi-final of the tournament.

The pitch in Abu Dhabi has been a fairly good one for batting in the T20 World Cup. The teams have started to get big scores over the last few games. But bowlers are expected to have quite a bit of say. Chasing should be the way forward for teams.

Aaron Finch has been in stupendous form in the ongoing edition of the T20 World Cup. He is currently the leading run-scorer for the Aussies, having notched 121 runs at an average of 30.25 and a strike rate of 30.25. In the previous match, the right-hander smashed 40 runs off 20 balls and showed the kind of form he is in. The Caribbean bowlers can’t afford to drop their guard.

Adam Zampa has been the standout bowler for the Aussies in the tournament thus far. The leg-spinner is currently their leading wicket-taker with 10 scalps from four games at a stupendous economy rate of 5.93. He also picked up a five-wicket haul against the Tigers and looked in great rhythm. The West Indies batters need to be careful while facing him. 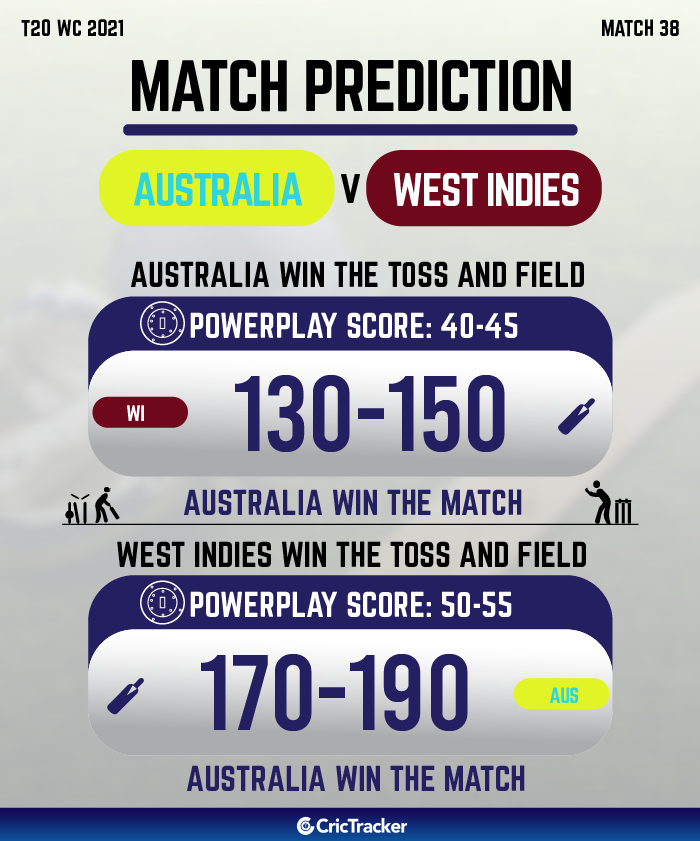