Tymal Mills has been ruled out due to a thigh strain and Reece Topley has been picked as his replacement.

England and South Africa are set to cross swords in Match No.39 of the ongoing T20 World Cup 2021 on Saturday, November 6 at the Sharjah Cricket Stadium in Sharjah. The Brits, led by Eoin Morgan, are all, but through to the semis, having won all four of their matches with a net run rate of 3.183.

However, they have been jolted with a blow after Tymal Mills was ruled out with thigh strain. Reece Topley has been roped in as his replacement. The Proteas, on the other, have to win their next game to have any chance of qualifying for the semi-final. They also need to get their nrr above Australia’s.

The pitch in Sharjah has been a sporting one thus far in the T20 tournament. The batters have got runs, but the bowlers, especially the spinners, have extracted a lot from the surface. Batting second should be the preferred option for the teams.

Jos Buttler is in the form of his life of late. The right-hander has smashed 214 runs from four matches. The average of 214 means that he has got out only once in the tournament thus far. In the previous game against Sri Lanka, Buttler bailed his team out and scored a masterful ton. Moreover, he has scored those runs at an incredible strike rate of 153.95.

Anrich Nortje has bowled with a lot of venom in the T20 World Cup. In four matches, the speedster has picked up eight wickets and is also the leading wicket-taker for the Proteas in the mega event. Moreover, the fact that he has bowled at an economy rate of 4.56 shows that batters have found it tough to get him away. The England batters need to play him with caution. 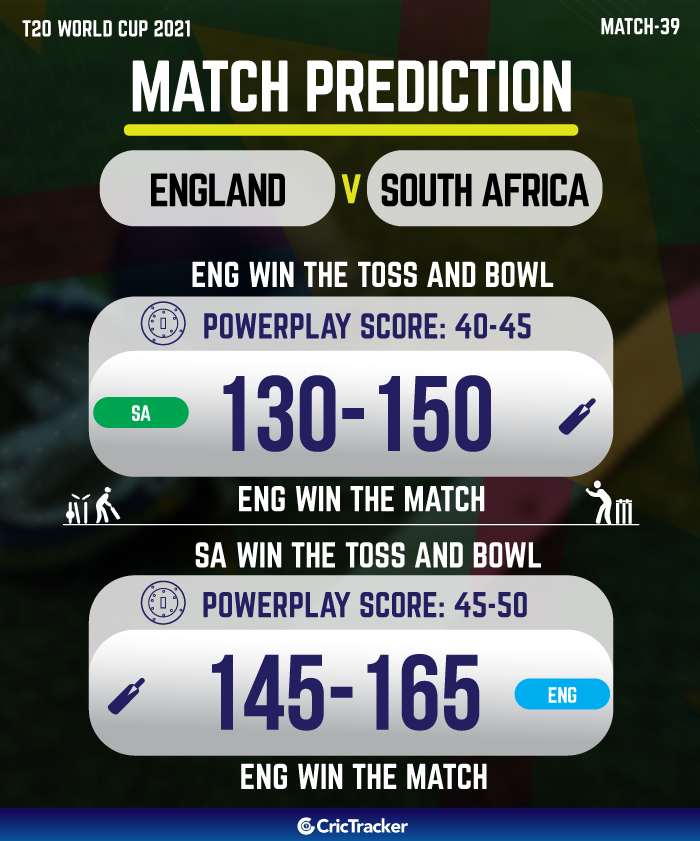