Rashid Khan has a hamstring injury, but the Afghan skipper is confident of taking the field in the Final.

Afghanistan started the tri-nation series with an absolute bang, rolling over Bangladesh and Zimbabwe comprehensively at the Sher-e-Bangla National Stadium in Mirpur. However, the Chattogram leg of the tournament saw the Afghans lose both their games. The matches at the Zahur Ahmed Chowdhury Stadium were dead rubbers and Rashid Khan’s men finished second on the table.

The Final of the series is scheduled to be played in Dhaka on September 24 and Afghanistan will be looking to end the extravaganza on a high, remaining unbeaten at the venue. The Tigers, on the other hand, are in good form after winning their last two league games and topping the points table. Most importantly, Shakib Al Hasan and Co ended their four-match losing streak against the Afghans.

In the three games in Mirpur, the team, batting second faced a lot of troubles. The pitch tends to slow down in the second half. Both teams’ batting is in reasonable form and the sides would be better off setting a target and then push the opposition on the backfoot. The conditions will be cloudy with chances of rain. The temperature will be around 28 degrees Celsius mark.

The Tigers can give Mohammad Naim a chance in place of Najmul Hossain Shanto, who failed in his first two games. Liton Das has shown positive intent and his role will be key in the powerplay. Shakib Al Hasan made amends with a POTM performance and he needs to carry on from where he left. The veteran will need to step up with the leather as well. Mushfiqur Rahim is yet to come in full flow.

Mahmudullah should be in a positive frame of mind after getting a couple of handy knocks in the middle. Afif Hossain has shown that he can pack a fair bit of punch. In the last encounter, he was entrusted to bowl and he delivered with a couple of wickets that triggered a collapse. The fast bowling unit, including the likes of Mustafizur, Shafiul, Saifuddin, has done reasonably well.

The Afghans may bring back Fareed Malik in place of Karim Janat, who has leaked runs without much success. Rahmanullah Gurbaz is the leading run-scorer of the series, having notched 133 runs at a strike-rate of 134.34. His partner Hazratullah Zazai has been getting the runs, but is yet to get back to his brutal best. Mohammad Nabi and Najibullah Zadran are key elements of the middle order.

Rashid Khan pulled a hamstring in the last match, but he is determined to play even if he’s 10 per cent fit. He came back and bowled with the injury in the last game. Naveen-ul-Haq got a chance in the previous match and put a lid on the run-scoring. The 21-year-old skipper is likely to retain his position in the team. Mujeeb Ur Rahman has been economical while bowling in the powerplay. 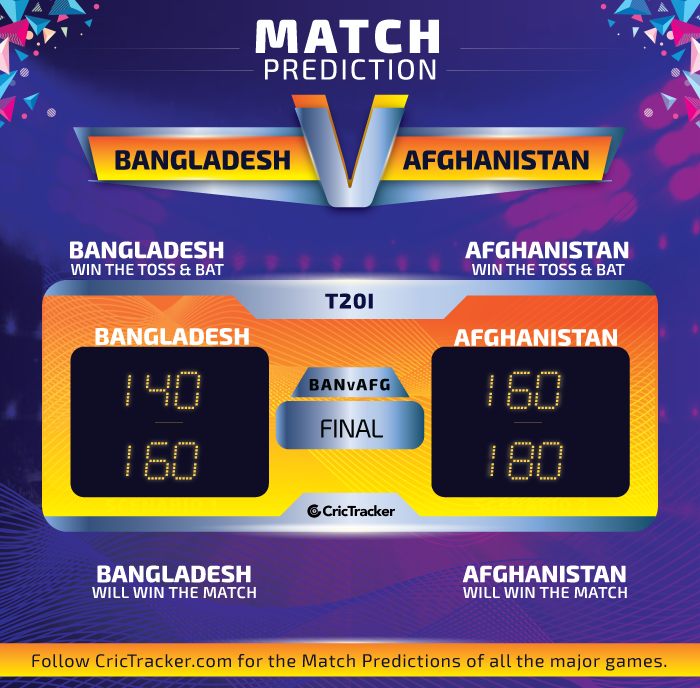