If Rahim opens the innings again, opting him as captain is worth a punt.

The 4th match of the T20I Tri-Series 2019 will be played between Bangladesh and Afghanistan at the Zahur Ahmed Chowdhury Stadium in Chattogram.

This will be the second instance that these two sides will square off against each other in this series. The last time these two sides met, it was a tale of two young lower-order batsmen putting up a masterclass in batting for their famed and experienced top-order. While it was Afif Hossain‘s blitz (52 off 26 balls) ensured Bangladesh got out of the jail, it was Ryan Burl’s pulsating hitting (57 off 32 balls) that put the visitors in a position of strength after they had been reduced to 5-64.

But Bangladesh’s problems at the top ultimately proved to be their nemesis against the Afghans. The likes of Rahim (5), Das (0), Mahmudullah and Sarkar need to come to the party if the hosts are to harbour any chance of winning the tournament.

Zimbabwe, on the other hand, will be looking for their first points in the tournament. Their nemesis- much like Bangladesh- has been the inconsistent returns from their top-order and they’ll hope that the likes of Masakadza and Taylor cash-in on their starts, unlike the first two games.

Rain is likely to play spoilsport in this game. At 7 PM local time, there is a 51% chance of the heavens opening up with thunderstorms which might interrupt the proceedings. The temperature will hover around 30-31 Degrees Celsius during the match.

The pitch at Chattogram is a good one to bat on. In the 17 games played at the venue, the highest score recorded has been 5-196 by South Africa in 2014. Overall, the average score at the venue is 143.

Shakib Al Hasan should no doubt be the top pick courtesy his all-round contributions. Mohammad Saifuddin took the new ball and also bowled at the death which makes him a crucial pick as well.

For the visitors, Sean Williams, Taylor and Burl will be crucial. Hamilton Masakadza is nearing the end of his international career and he could be itching to make it big soon. 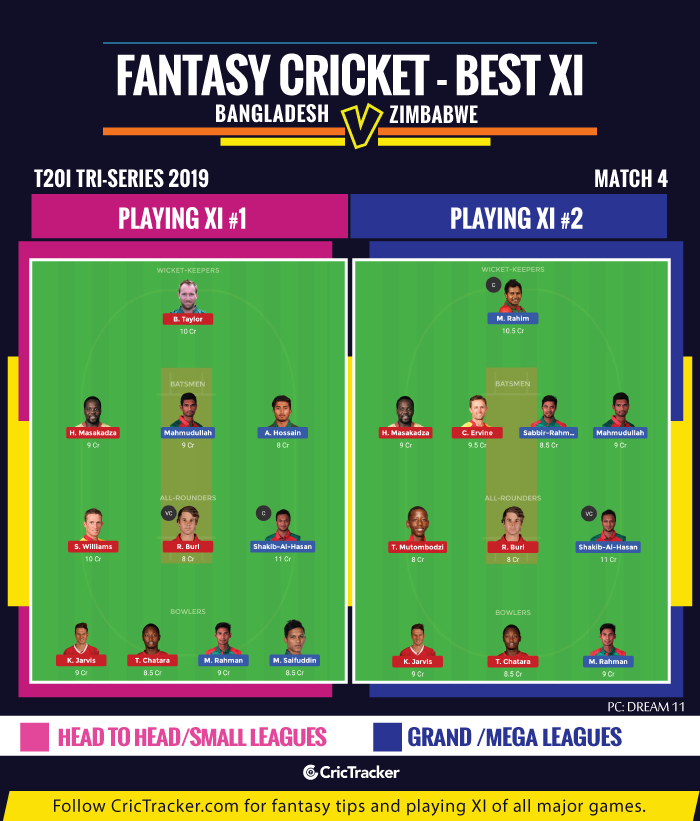 With all-rounders contributing in both the facets of play, it would be advisable to pick likes of Burl or Afif as the captain/vice-captain of your team. With Mushfiqur opening the innings and him being a wicket-keeper, opting him as captain could be worth a punt.

Both sides are coming off a defeat in their previous encounter but considering Bangladesh are playing at home and have already defeated Zimbabwe earlier in the competition, they’ll start as favourites.